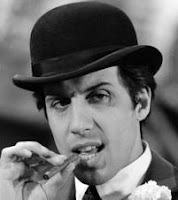 Adriano Celentano was born January 6, 1938 in Milan, Lombardy, Italy. He is an Italian singer, songwriter, comedian, actor, film director and TV host. He is the best-selling Italian singer, and the best-selling male artist of Italy today. Heavily influenced by his idol Elvis Presley and the 1950s rock revolution and by the American actor Jerry Lewis, he has retained his popularity in Italy for the last 40 years, selling millions of records and appearing in numerous TV shows and movies among which was the 1966 western musical “A Fistful of Songs” where sang ‘Ringo’. Celentano is married to actress, producer Claudia Moroni [1944- ] (1964- ) and is the father of actresses Rosita Celentano [1965- ] and Rosalinda Celentano [1968 - ]. Today we celebrate Adriano Celentano’s 75th birthday.