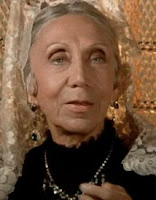 Maria Clementina Cumani was born on January 7, 1908 in Caldé, Castelveccana, Varese, Lombardy, Italy. Trained as a dancer, she became active in the mid-1930s and was one of the greatest Italian interpreters of modern-dance, inspired by the great Isadora Duncan. Author of brilliant choreography, she decided very early on to dance only interpreting compositions of her own creation.

In June 1936, she met the poet Salvatore Quasimodo [1901-1968], who fell in love with both her elegant beauty and her lively artistic genius. The two had a son, Alexander. After troubled ups and downs, Cumani wed with the poet in 1948. Maria Cumani was essentially the muse of the poet, and above all a valuable collaborator: Quasimodo would help in the translation of Greek lyrics of the poems of Neruda. After a complex and painful marriage, the two separated legally in 1960.

She then became a very active film actress. Maria participated in films such as “Juliet of the Spirits” (1965), directed by Federico Fellini, “Medea” (1969), by Pier Paolo Pasolini, “L'inquilina del piano di sopra “ (1978) by Ferdinando Baldi, and other important films by directors such as Lina Wertmuller, the Taviani brothers and Roberto Rossellini. Despite being separated from her husband for a long time, she often used the last name Quasimodo. Maria appeared in one Euro-western as Mary in “I Do Not Forgive... I Kill!” (1968), directed by Joaquin Marchent with James Philbrook and Norma Bengell.

In 1981 she published a critical essay on dance, followed by a collection of poems Improvviso un vento. After a long absence from the arts, in which she devoted herself to teaching, Cumani returned to dance in 1986 as the first opera dancer in “Fedora” by Umberto Giordano, staged by Giancarlo Cobelli at the Verona Philharmonic Theatre.

In 1995, a few months before her death on November 22, 1995 in Milan, Lombardy, Italy, she published a volume containing diary entries, letters to Cumani Quasimodo and poems under the title L'arte del silenzio. Finally in 2003, thanks to her son Alexander, came posthumously from the publisher Nicolodi, a collection of her poems, titled O forse tutto non è stato.

Today we remember Maria Cumani Quasimodo on what would have been her 105th birthday.