Lee Broughton DVD Review - The Brute and the Beast 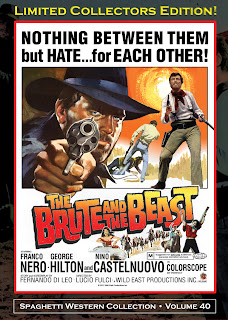 Tom Corbett (Franco Nero) is prospecting for gold when he receives a mysterious message advising him to return to the grand family home that his mother bequeathed to his estranged brother, Jeff (George Hilton).  Upon arriving there Tom is shocked to discover that the now dilapidated house is owned by Mr Scott (Giuseppe Addobbati), an elderly land-grabber who also runs most of the business enterprises found in the neighbouring town of Laramie.  Worse still, Jeff is now a drunken wreck who lives in a run down shack with the brothers' erstwhile Indian wet nurse Mercedes (Rina Franchetti).  The locals are being violently subjugated by Scott's psychopathic son, Junior (Nino Castelnuovo), and his gang of vicious rabble rousers but Jeff shows little interest in fighting back and simply wants Tom to leave.  When the family friend (John Bartha) who sent the initial message to Tom is murdered, Tom seeks an audience with Scott but winds up almost being bull-whipped to death by Junior.  Jeff remains unmoved but when Mercedes becomes the next Corbett family associate to needlessly perish, he agrees to assist Tom in his quest to discover why Junior wants him dead. 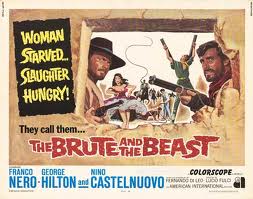 Written by genre stalwart Fernando Di Leo, The Brute and the Beast was horror maestro Lucio Fulci's first Spaghetti Western and it remains his best.  Franco Nero is on good form here as Tom - and George Hilton impresses as Jeff - but the show is stolen by Nino Castelnuovo who provides an outstanding and completely convincing turn as the dangerously psychotic Junior.  The Scott household's bizarre approach to father-son relationships has seen old man Scott indulge his offspring to such an extent that Junior's anti-social and thoroughly sadistic behavior now knows no limits.  And Fulci fully relishes and exploits every opportunity that Junior's deviantly demented nature grants him, resulting in a succession of violent set-pieces appearing onscreen: the aforementioned whipping of Tom, a scene where a man is hunted down by Junior and a pack of rabid dogs, an extended barroom brawl, the casual murders of innocent farmers, etc, etc.  As the film winds towards its end, the reasons for old man Scott's interest in Tom and Junior's resultant jealous streak are slowly revealed but most viewers will have already guessed the nature of the narrative twist that links old man Scott and Tom.  The film ends with a pleasingly choreographed, suspense-laden and violently executed gun battle which sees Tom and Jeff taking on Junior and his henchmen.

The Brute and the Beast might be a relatively low budget genre entry but it's a great looking and - at times - stylishly presented film.  Indeed, Fulci and cinematographer Riccardo Pallottini present some expertly framed and angled shots here and the show's action scenes - which feature quite a lot of flashy stunt work - are particularly well staged. The film's costumes are also very good: Franco Nero sports an outfit that references those previously worn by both Django and the Man With No Name.  There are also a number of unusual elements that help this show to stand out from the crowd, the most obvious being Tchang Yu's turn as an elderly and eccentric Chinese émigré who assists Tom and Jeff when he is able to.  Working simultaneously as a blacksmith, an undertaker and a saloon's piano player, Yu's character often offers garbled pearls of wisdom to our heroes before demanding some kind of small but symbolic payment in return.  Lallo Gori's enjoyable soundtrack score is suitably rousing and emotive.  The film's title song, the dramatic 'A Man Alone', is interpreted by Sergio Endrigo in a Scott Walker-esque way and it remains one of the genre's best lyrics-based offerings.  This is a great little film that fully deserves the 'special edition' treatment that Wild East have bestowed upon it here. 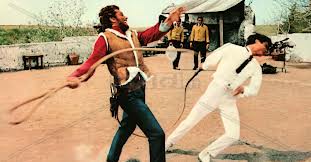 Picture quality here is near enough excellent.  I made use of the disc's 'International English language dub' track and the quality of that track's sound was very good.