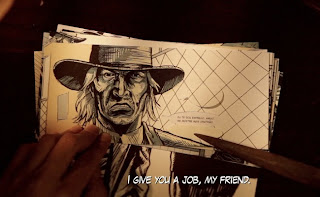 Any time you can combine Spaghetti Western sensibility with graphic novelization and the Grim Reaper — and you can keep the whole thing under six minutes — I’m totally there. Edson Oda and friends accomplished this with “Malaria”, a short film about a hitman hired to kill Death to save a little girl from malaria. Oda combined Origami, Kirigami, Time lapse, nankin illustration, props, comics, Western movie tropes, and even fire into one seemingly-continuous shot that feels like an animated motion comic while being much more enthralling because the pages are real and the artists’ hands can be seen.

It also helps that the voice acting by Antonio Moreno and Rodrigo Araujo is excellent, as are the illustrations by João Pinheiro.

Edson Oda made Malaria to submit to the Django Unchained Emerging Artist contest, but he missed the deadline. He still wins if you ask us.

Malaria, tells the story of Fabiano, a young Mercenary who is hired to kill Death.