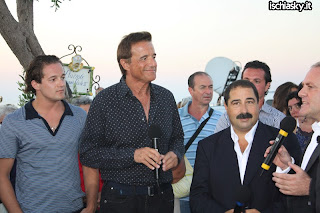 Lewis Eduardo Ciannelli (pictured far left in photo above) was born on January 12, 1923 in Rome, Lazio, Italy. The son of actor Eduardo Ciannelli [1889-1969] (pictured second from left in photo above) he grew up in California while his father was appearing in American films. He’s worked extensively as a voice dubbing actor for many years; providing English language voices for numerous Italian B-movies. Lewis also provided English dialogue for several films including three Euro-westerns “The Man from Nowhere” (aka “Arizona Colt”), “Django Shoots First” (1966) and “Brothers Blue” (1971). He was the dialogue director on “The Great Silence” (1968). Lewis also acted in 18 film and television appearances and was associate producer of the western “Heller in Pink Tights” (1966) and an episode of the American TV series “The Americans” (1961). Ciannelli died in June 1990. Today we remember Lewis E. Ciannelli on what would have been his 90th birthday.