THE PROPHET, THE GOLD AND THE TRANSYLVANIANS 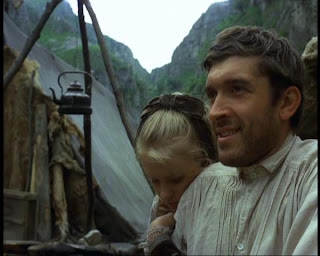 The mining town of Cedar City, Utah, is ruled by Mr. Walthrope, a polygamous Mormon prophet, his son the marshal and their band of ruffians. John Brad is falsely accused of shooting a gunfighter in the back sent against him by the prophet and is forced to flee. Meanwhile, a train brings Jeff Groghan, a gunfighter called by Walthrope, and two Transylvanian immigrants, Traian and Romulus Brad, who have come to meet their brother John. Traian speaks only Romanian and Romulus tries to get by with his dictionary.

At the station, Grogham is received with a gunfight and Traian has occasion to fire his Turkish gun, a souvenir from the siege of Plevna. Upon arrival at the saloon, Traian is invited to play poker with Groghan, a former Confederate officer who still wears his grey uniform and another man. Traian manages to win the pot and Bob, the slave of the Confederate officer.

The fun is interrupted by the arrival of the prophet. With very limited command of English, the Brads inform him that they are looking for John, whose face they see on wanted posters. They are judged by the innocuous drunkard Judge Jo Dolittle, who sentences them to hang but the prophet takes them to his farm, where they toil as farm hands.

The Brads and Bob escape and live in a hut under the Romanian flag where they fish and find gold nuggets. John tries to organize the miners against the prophet who sets the prices and takes their gold away to Salt Lake City, but the miners prefer to allow things to continue as they are.

Later, Walthrope's men assault a man and his daughter that is rescued by John Brad. John and the girl finally reach the Brads' hut. They team together to stop the convoy that carries the miners' gold stolen by the Mormons.

In the ensuing gunfight, the Brads win and successfully defend the miner’s camp against the Walthrope band. Walthrope is captured and the Brads, Bob and the girl ride in the sunset.