Who Are Those Guys? ~ Marinko Cosic 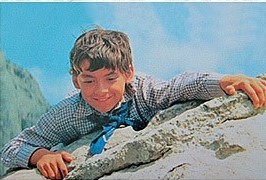 Marinko Cosic was born in Yugoslavia and was a child actor who appeared in only seven films beginning in 1963 and ending five years later in 1968. Three of those seven films were DEFA Karl May films where he turns in excellent interpretations of his characters.

What happened after his short film career ended is unknown but it’s suspected he worked as a construction worker for most of his life.

He appeared at the Karl May Film Festival in Croatia in 2016.