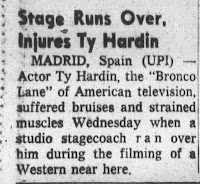 MADRID, SPAIN (UPI) – Actor Ty Hardin, the “Bronco Lane” of American Television, suffered bruises and strained muscles Wednesday when a studio stagecoach ran over him during the filming of a Western near here. 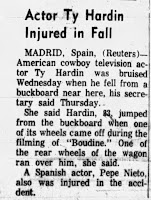 She said Hardin, 33, jumped from the buckboard when one of its wheels came off during the filming of “Boudine” (The Man of the Cursed Valley). One of the rear wheels of the wagon ran over him, she said.

A Spanish actor Pepe Nieto, also was injured in the accident.

Ty Hardin, now in Spain to direct, co-produce and star in a Western titled “Boudine” (The Man of the Cursed Valley) suffered multiple fractures when a prop chuck wagon lost a wheel and spilled the hard-riding ex-“Bronco” star.