Today marks the 50th anniversary of the premier of “Una pistola per cento croci!” )Gunman of 100 Crosses) directed by Lucky Moore (Carlo Croccolo) and starring Tony Kendall, Marina Mulligan and Dick Palmer. The story is about Santana is a former Southerner who wants to avenge the death of his fellow soldiers among which is Jimmy Dublin which was caused by the betrayal of their commander, Frank Dawson. Dawson actually had a henchman do the killing. Santana takes the body of Dublin to the town of Springfield, the home of Jimmy’s sister Jessica. It turns out that Jessica’s father has also been murdered by unknown killers. Jessica’s boyfriend, Louis, turns out to be Frank Dawson, the man Santana is seeking and a member of a gang led by a woman who is a master of the whip. Louis is only marrying Jessica in order to obtain her ranch which contains a gold mine. Santana is helped by Thomas the black servant of Jessica. In a gun battle with the gang Thomas is killed, but in the battle the gang’s leader is killed by Louis. Santana kills Louis the traitor and avenges the death of Jimmy and his comrades. 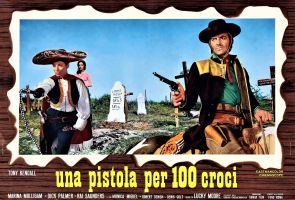