[A Russian cowboy actor reads a newspaper Wednesday on the set of an Italian type western cowboy movie in Alabino, about 43 miles from Moscow

ALABINO, Russia (AP) – Once “spaghetti westerns” were filmed in Italy and Spain to keep down production costs. Now a less expensive European location is producing a new brand of cowboy movie: the Russian ‘borscht western.’

“It’s a cheaper place right now,” said Italian director Enzo Castellari, who arrived in Russia three months ago.to direct Jonathan of the Bears, a film about a white boy raised by bears and American Indians after his parents are murdered.

“That would be very expensive anywhere,” said Catellari, who has directed 36 films – including at least 15 westerns – mainly in Spain and Italy. “Here, it is quite easy to do.”

The $8 million, English language movie, produced by and starring Italian Franco Nero, has a largely Russian cast, although the leading actors are Italian and American.

Nero said some of the American Indians portrayed in the movie came from Mongolia and Kyrgyzstan, which borders China.

Everything on the set is Russian-made, except for such all-American props as covered wagons, stagecoaches and old-fashioned western saddles – shipped in from Italy.

Nero said the film originally was to be shot in the former Soviet republic of Georgia, but the locale changed after the civil strife there made it too dangerous. Some episodes were filmed in Sochi, on the Black Sea, he said.

Spaghetti westerns traditionally were low-budget flicks with simple “cowboy and Indian” plots. But Nero said his film will resemble Dances With Wolves, and will be “anti-racist” and a little ecological.

About 150 trained military horses are being used, as well as some soldiers. Castellari said their uniforms looked so authentic as cavalrymen that only cowboy hats were required. 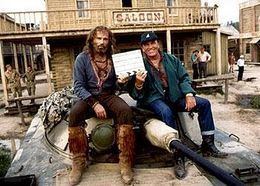 On Wednesday, scores of Russian extras milled through this town, which was muddied by summer rains. A drunken stableman stumbled over wooden planks in front of the feed-and-grain store. Women dressed as prostitutes chatted in Russian near the Old West-style post office. Two Russian actors on horseback approached the saloon.

One reason costs are so low is the sorry state of Russia’s economy.
Cowboy extra Alexander Volkov said he receives 3,480 rubles (less than $4 a day in wages about twice the average Russian wage.

It’s not great money, but there’s no other work,” he said.

Natasha Lebedova, an 18-year-old extra, said she gets about $8 a day, which helps pay for her studies of Japanese and English at Moscow’s Institute of Foreign Languages.

She said her husband, a midget, is paid more as conductor of the saloon’s can-can dancers.

Makers of “borscht” westerns followed other foreign filmmakers to Russia, including Americans who made gangster and spy movies.

Natasha Sedelnikova, 35, who plays a prostitute, said she preferred acting in real American westerns to the Italian copies.

“If an American director pays you money, he has to use you,” said Sedelnikova, who spent the afternoon chatting with other actresses on the set. “He doesn’t just pay you to sit around.”