Who Are Those Guys ~ Hercules Cortez 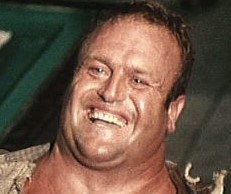 Hercules Cortez was born Alfonso Carlos Chicharro Lamamie de Clairac in Spain on July 7, 1932. He began his professional wrestling career at the age of 20 in his home country for several years under the name Pepe Cortes. Chicharro stood 6 feet 3 inches tall and weighed well over 300 pounds. As Pepe Cortes, he began wrestling all throughout Europe and ultimately landing in Canada.

it was at the suggestion of his wife that Chicharro developed a more intimidating wrestling name. She was the one who came up with the name ‘Hercules’ Cortez due to his big, burly stature. Before his matches, Cortez would usually challenge fans in attendance to feats of strength by lifting heavy objects. When the fan couldn’t lift the object, Cortez would show off his power and strength by lifting the object with ease.

Hercules Cortez was a heavyweight wrestling champion in both his native Spain and Australia. He would become a big star in Europe and filmed several movies in Spain and Italy. Cortez would also find success in the United States wrestling for the American Wrestling Association (AWA). Cortez formed a tag team with Red Bastien and capture the AWA world tag team titles.

Cortez and Bastien were the reigning world tag team champion in July of 1971, when they had a successful title defense in Winnipeg, Manitoba, Canada. The very next night, Cortez was scheduled to go one on one with Nick Bockwinkel in the main event in Minneapolis, Minnesota. Hercules was driving from Winnipeg to Minneapolis with Bastien as his passenger. Eye witnesses said that Hercules was driving well over 100 miles per hour down a highway in St Paul, Minnesota.

The next time they saw the vehicle, it had crashed on the side of the highway. Bastien survived the wreck with some minor injuries. Hercules Cortez on the other hand was ejected from the vehicle and landed approximately 75 feet away from the wreckage. It was believed that Cortez suffered a broken neck and died instantly. The next night, AWA promoter Wally Karbo decided to go on with the show and had AWA world champion Verne Gagne replace Cortez at the event.

Hercules Cortez was 39 years old at the time of his death.