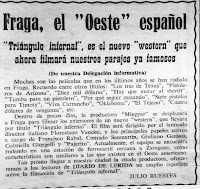 ‘Triangulo infernal, is the new “western” that will now film n our already famous places

(From our Informative Delegation)

Many are the films that have been shot in Fraga in recent years. I remember among other titles: "Three from Texas", Gunmen from Arizona ". "Ten Thousand dollars", "We Must Kill the SherifF", "Grave for a Gunman", "Why Keep Killing" "Seven Guns for Timothy", "Viva Carrancho", "Oklahoma", “El Tejano"," Four Dollars of Revenge”, etc.

In a few days, the production company "Mingyar" will travel to Fraga to film the exteriors of a new "western", which will be titled "Triangulo infernal". The film will be directed by the award-winning Italian director Florestano Vancini, and the main roles will be played by Francisco Rabal, Conrado Sanmartin, Giuliano Gemma, Gabriella Giorgelli and “Pajarito”. Currently, the The team is filming at a railway station near Zaragoza, whose characteristics are similar to those that exist in the American West.

As soon as the aforementioned production company arrives in our city, we will offer the readers of DIARIO DE LERIDA an extensive report on the filming of "Triangulo infernal".