The Torturous Arrival of Der Crow

Long thought to be an uncompleted film “Fill My Grave With Gold” was first mentioned in Variety, 1971, while it was filming. As this was before both video & the internet it would take twenty years before it would resurface in the pages of the Bolaffi Catalogues under the Italian title “...E il terzo giorno arrivò il corvo” / “On the Third Day Arrived the Crow”. This listing confirmed its existence to avid viewers.

“Fill My Grave With Gold” first came to light in late 1971, in the December 29th of Variety. It's production company Harlindel Films had put out a press release announcing that “Fill My Grave…" had started lensing at Elios Studios, Rome. Harlindel stood for the names of the American producer Renata Harris (Har), and actors Lincoln Tate (Lin) & Perry Dell (Del), who were financing the film, sans credit due to the dicey tax situation of the Italian industry. Most of the expat American actors and writers working in Italy in those days had to lump-it and pretend that their projects were solely Italian in origin, to get them made. In the Variety announcement one "John Kennelly" was listed as director, while the finished film was signed by lowbrow Gianni Crea, who had previously made “Law of Violence” (3/69) & “Finders Killers” (3/71). Perplexing?

To muddy things further towards the end of filming co-star Perry Dell told Variety that he had also written and directed the film. Which appears to be partially true. The name "Kennelly" also appears to stand for both Dell, and his leading player Lincoln Tate, who was born 'James Harmon Kennelly'. Together they both make-up two thirds of Harlindel management. So, it's likely they each had a handle directing themselves, while old Gianni Crea, was left to hand the Italian crew and cast. Crea then got sole credit, or blame for the film.

Just before the start of “Fill My Grave With Gold” Dell's very pregnant wife Merriana Henriq [Mary W. Henrques] was working away uncredited in the Sophia Loren hospital weeper “White Sister”, aka “The Sin” (3/72), which presumably kept her from appearing alongside her husband.

With filming completed by mid-January of '72, Harlindel announced they were proceeding with a second western called “Judge Them Quickly, Hang Them High, Bury Them Deep” (another great title!). Suddenly the fledgling producers must have had a serious cash flow problem as the second film never materialized. How far along it got is anyone's guess. Their money problems then extended to the film's release Italian schedule, which took an unusually long time to reach local screens. That might explain why Harlindel folded after a single film. Back then the normally quick time frame between production & exhibition in Italy was usually a few months. It then took Harlindel a good year & half to deliver the film to the state censors, April 20, 1973, with its release following three months later, July 21. Then nothing. Stateside Harlindel had no takers, and thus no income. It would be a good decade, with the advent of the video market, till most viewers got wind of it. First in the grey area of early vhs, with copies struck off of a German language tape, under the title “Der Crow”. Who needs subtitles when you have a rare film to watch? 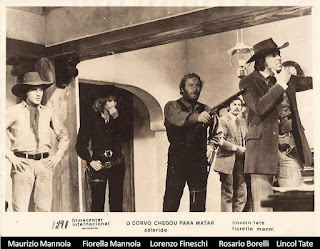 In the meantime, Perry Dell and Lincoln Tate both moved on to separate films. Blond Tate signed up for another western, sans Harlindel, “For A Book of Dollars” (12/73), which again would sit unreleased Stateside, until Snicker Cinema snapped it up in the late 90's. While On the On the Third Day Arrived the Crow sat on the shelf awaiting release, Dell always the wheeler dealer announced he was making the first black super hero flick entitled “Zuman” ("a sort of black version of Tarzan"). Who knew that Marvel had a similar comic book called Black Panther, that dated back to 1966, on newsstands? Dell here got himself involved with Mafia moneyman Louis Periano, who had just made both “Deep Throat” & “The Devil in Miss Jones”, to finance his dream film. As “Zuman” never got made, one would assume that Periano had to with-draw his services, as he was being hounded by the FBI, over his porno dealings. Remember, the leading man of both X'ers, Harry Reems, was charged with inter-state trafficking of pornography, even thou he had nothing to do with their distribution. That got him a twenty-plus-year sentence to which he later made a deal with the feds to stay out of jail. With the deal for “Zuman” gone, Dell turned to grinding out his own soft-core pornos with titles such as “The Diktator” (1974) & “Deep Jaws” (1976), both with a hint of humor. The announced director of “Zuman” later worked on “The Klansman” (1974) as an assistant.