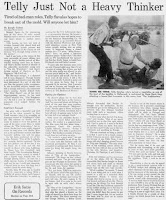 Tired of badman roles, Telly Savalas hope to break out of the mold. Will anyone let him?

Madrid, Spain – In the shimmering heat of the desert 30 miles outside Madrid stands a western movie set where one man’s dream is another man’s mirage.

Telly Savalas, six feet, one inch of shirtless, bronzed skin, shaved head and menacing girth, scrawls pictures and exclamation points in the vicious air and declares: “I’m through being a heavy in the movies.”

But like most mirages, it is distorted and soon disappears. Though Savalas is an erudite and sensitive man, his looks have determined the sort of role that gets him the greatest public acceptance. As the homicidal religious fanatic who kills a woman and betrays his commando team’s mission, Savalas helped make “The Dirty Dozen” on of last year’s biggest growsing movies. In his most recently released film, “The Scalphunters,” he led a crew of cutthroats who massacred and scalped Indians for bounty.

An actor with a beautiful soul isn’t; going to be taken seriously in Cary Grant romantic roles if he resembles an American version of “Goldfingers” Odd-job. The solution for Savalas and he seems to realize it from the pattern of some of his most recent films, is comic villainy. In “The Scalphunter,” for instance, Savalas had some wildly slapstick scenes in long johns with Shelley Winters as his quarrelsome mistress and Burt Lancaster stalking him and his gang.

On the dusty windswept set of Columbia Pictures’ “Day of the Landgrabber” recently, Savalas explained: “In the last four pictures out of the box I was the heavy. So I went and did this comedy in Rome with Gina Lollobrigida, “Buona Sera, Mrs. Campbell.” And then I made the “Assassination Bureau,” a turn-of-the-century comedy in which I play a slightly faggy English lord. I’m through playing heavies. At least for a while, anyway. Listen, if acting doesn’t work out for me, I could quit tomorrow. I haven’t been an actor that long that I couldn’t chuck the whole thing.”

Savalas, born 44 years ago in Garden City, L.I., came late to acting. With a bachelor of science degree (with honors) from Columbia University, he ended up working for the U.S. Information Agency as an executive director. He became a senior director of news and special events for the American Broadcasting Co. He did some work as an executive director with the Stanford Playhouse and taught adult education courses in New York before casually drifting into an acting career. It happened during a chance audition for a TV show, “Bring Home a Baby.” Later, he played a television character named “Father Pyre.” His third role on TV foreshadowed the typecasting that has finally began to haunt him. He played vice lord Lucky Luciano.

“I came into the business seven years ago and I learned right away that it’s not a matter of acting, but how you look and the roles you’re not allowed to play because you’re bald or fat,” said Savalas, “I’ve never had to sell myself. For the first three years of my career, I did a live show continuously, I played a priest and was to green to know that I was supposed to be nervous. Burt Lancaster saw me as Luciano and brought me to Hollywood to play the heavy (a hardened convict) in “The Birdman of Alcatraz.”

“It doesn’t please me to hear that Savalas is the best heavy in the business. And I’m concerned about not letting the trend of the past two years continue. (In the soon to be released “McKenna’s Gold,” Savalas plays a heavy to Gregory Peck’s hero.) A Greek, my friend, has to have all sorts of options open to him. Or he’s one hell of an unhappy Greek.”

“My mother’s a great artist,” he said, “I’ve been surrounded by art all my life. So I come into this business with the emotional prerequisites. At first, I was astonished at getting paid these fantastic prices for doing this simple thing, this acting.”

Schneer, listening to Savalas between takes of “Day of the Ladngrabber,” interjected: “He shows up late, without rehearsal, and says: “I’ve got total recall, give me my 40 pages to memorize.’ The cameraman asks him where he’s going to stand. Telly says ‘Guess.’ Then he does his bit and turns for applause.

“But you know, Telly’s an instinctive actor. He knows what’s the right thing to do himself. And he can tell another actor when he’s reading a part wrong. He can’t tell why. He can’t explain it. He just knows. And it’s a pain in the neck to work with an actor who’s always right.”

In “Day of the Landgrabber,” Savalas plays another heavy, a small-town big shot who has placed a bounty on the scalps of Apaches to drive them from the land he wants. The films nominal star was George Maharis, a fellow Greek. Maharis demanded that Savalas be brought into the production. Savalas immediately got co-star billing above the picture’s title. But Maharis breathed easier with such a top-drawer villain backing him in the movie.

“I don’t know what the hell I’m doing here,” said Savalas. “One of my agents committed me to this film sight unseen and I had to make it. I want to be back in London. That’s my town. You come see me there and I’ll take you to the best restaurants and gambling in Europe.

“The one drawback to being a celebrity is that I used to be a Greek swinger before I became an actor. And I knew it was because of me, Telly. Now I can’t always tell who’s hanging around because it’s Telly the Celebrity.” The only members of his travelling coterie whom he knows for sure still see him as just Telly are his wife, Marilyn, and daughters Christina, 16, Penelope, 6, and Candace, 5.

Telly the Celebrity and his interviewer sat in the white 250 SL Mercedes convertible that Savalas bought in Rome and drives back and forth to Madrid every day. He wore dark glasses and played tape in the car’s tape recorder.

“All of a sudden,” he mused “I found that I was being paid in a week what I earned in a year as a dedicated State Department official. I realize now, though, that they’re paying me for what I’ve learned and been all my life. They’re paying me for things I’ve lived through in my life. Like the childhood experience of my mother sending me to the door to tell the milkman she wasn’t home because she didn’t have the money to pay him. I never forgot that. It’s an emotion I’ve been able to draw on in certain dramatic situations.”

Savalas is one of the busiest actors in the business. He is presently considering a half-dozen film offers. Among them are the upcoming James Bond movie, which will be made in Portugal and Switzerland. He has been offered $300,000 to play Mussolini. And he may play Fidel Castro in 20th Century-Fox’s “Che,” which will star Omar Sharif in the title role of the late Che Guevara. Savalas has two misgivings about “Che.” He feels that “Castro was the real genius of the Cuban revolution, yet the present script depicts him as a clown and hides him in Guevara’s shadow.” He is also worried that being linked in the minds of his American audience with the unpopular Castro may hurt his box-office popularity on future films.

Yet he insists that if he ever got disgusted with filmmaking, or the public tired of him, he’d retire gracefully. “When they send me home,” he said, “I’ll just pack up the wife and kids and go to Garden City again to live and tell the neighbors, “Yeah, I used to be an actor.”

Nonetheless, a clue to why he agreed to do a made-in-Spain western with a $750,000 budget and offering just another villainous for him came in the parting moments of the interview. Asked if he saving money toward the day when he might chuck the acting bit, Savalas roared with characteristic gusto: “I used to think that it would be heaven to earn $30,000 a year at the top of my profession. Now I make 10 times that on a movie and I still can’t save a dime. No I don’t have a nickel. This car we’re sitting in is one of eight that I own. I’m a Greek. Except for a couple of ship owners, no Greek knows how to save a cent.”