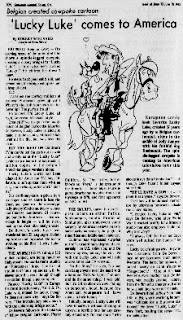 BRUSSELS, Belgium (AP) The opening scene of the animated film shows a spindle-legged cowpoke crossing a rickety bridge. Its “Lucky Luke” – but why he’s called “Lucky”, he claims he doesn’t know.

He steps back on solid soil, and behind him, the bridge collapses into a heap of dust.

That’s not the cowboy millions of postwar Europeans grew up with! Where’s the roll-your- own on his lower lip? The guy’s a fraud.

Created 37 years ago in the imagination of Belgian cartoonist Maurice De Bevere, Lucky Luke is about make it in the country where he has lived all his life, but was seen by none.

BUT THE WEST ON children’s TV in the United States is not as wild and wooly as in the “Lucky Luke” comic-strip albums that have sold 50 million copies in the original French-language versions alone.

Lucky Luke’s world has been adapted for American TV, says De Bevere, a soft-spoken man with an easy smile who signs his work “Morris.”

Our devil-make-care, ageless hero no longer smokes, there is less violence, and gone are the stereotype sleep Mexicans, dopey women and Chinese launderers. Of course the four Dalton brothers – identical except in height – will be there, making the West hilariously unsafe.

De Bevere’s works have been translated into 22 languages, including Arabic and Japanese. He is now working on his 51st “Lucky Luke” album.

THE ANIMATED TV films, a $5.2 million project, are being made by Hollywood’s Hanna-Barbera studios of “Flintstones” fame. The fist of 30 half-hour episodes will be shown later this year, though the station lineup is not complete.

Names “Lucky Luke” in Europe for the alliteration only. “On U.S. TV Luke will, indeed, be lucky, though he does not know why,” says De Bevere. “The introductory show starts with the collapsing bridge scene.”

De Bevere follows in the footsteps of fellow Belgian cartoonist Pierre Culliford  The latter, better known as “Peyo,” is the creator of the Smurfs – those blue, four-fingered dwarfs that invaded American toyshops in 1979, and first appeared on NBC in 1981.

THE SMURFS, known in non-European nations as either Puffos, Schtroumpfs, Smolfs, Pitufos or Schlumpfs, also underwent some surgery by American television censors touchy on sexism, the plight of minorities and kiddie-hour violence.

Culliford has expressed surprise at the “extraordinary degree of censorship” on U.S. television and De Bevere agrees, but says he can live with the Lucky Luke who will ride across American screens.

“In the films,” he says, “no one can bang anyone over the head with a hammer. ‘Kids will get a hammer and do the same thing,’ I was told. But it’s OK to show an anvil falling on someone’s head, because few American youngsters will have anvils in their homes.”

Initially, he says, Lucky Luke will have to survive without shooting at anyone, a terrible fate for any cowboy especially for the man “who shoot faster than his shadow” – although Luke hasn’t killed anyone since 1949.

“HE’LL HAVE A GUN but won’t point it at anyone,” says De Bevere.

The films will be dubbed later for use by television networks outside the United States.

“I created Lucky Luke in 1946,” says De Bevere, who after World War II worked briefly for a Brussels studio that also employed Culliford. Why a cowboy?

“I always felt the Frontier Days were well suited for humor,” he says.

Lucky Luke’s slapstick life parodies characters from De Bevere’s past or are borrowed from movie Westerns. The hero, for instance, is loosely based on John Wayne in “Stagecoach.” “One of the best Westerns ever made,” says De Bevere, who recalls stealing pictures from the film off a theater wall after he was told they were not for sale.

De Bevere lived in New York from 1948 to 1954, where working, he says was “difficult for a European cartoonist.” He drew “Lucky Luke” in New York, mailing the strips home for publication.