Who Are Those Composers? ~ Henri Verdun 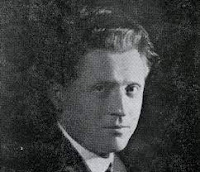 French composer Henri Verdun was born Maurice Jospeph Castellain in Roubaix, France on August 9, 1895. Verdun was a songwriter, classical, theater and film composer. Henri scored over 80 film scores between 1930 and 1958. He also wrote over a dozen songs that appeared in these soundtracks. His lone western score was for the semi-western “Ernest the Rebel” (1938) starring Fernandel.