Fraga, With the Effect of the ‘Far West’ 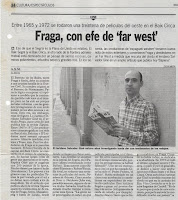 Between 1965 and 1972, about thirty western films were made in Baix Cinca

The fact that Segria is the Plana de Lleida is relative, El Baix Segre (and Baix Cinca, on the other side of the administrative border) is dominated by a landscape of rocky mountain ranges, dusty roads, dry bushes and large rivers. In the sixties, the ‘spaghetti western’ producers took good note of these exteriors and turned Fraga and surroundings Salvador Gine into a broad article published today by ‘Sapiens’.

The Barranc de les Bales, between Fraga and Seros, owes its name to a bloody battle during the Civil War. Its original name is Barranc de Matacanyes. It seemed logical to recover the topography as the fight was now further in time, but it has not been so because the bullets were once again the main protagonists of this arid landscape in the sixties and seventies. This time, however, they were blanks. Salvador Gine, from Lleida, tells it in the article Fraga, Ciutat sense Ilei published today by the magazine Sapiens. Between 1965 and 1972 two film production companies based in Barcelona, Balcazar and IFI, shot some sixty spaghetti westerns. Almeria was far away and Texas, more. But the surroundings of Fraga were quite similar. The Sorolla hotel in the capital of Baix Cinca became the center of operations.

Gine explains that 200 pesetas of the time were paid. A lot of money to portray an Indian (literally). The peasants and the gypsies were the favorites. Their skin was tanned by the sun and they didn't give the makeup guys as much work. In the article now published by the magazine Sapiens, there are testimonies of extras from Fraga, Seros, Massalcoreig and even Lleida, from where coaches were chartered. The stars were staying in the capital of Segria, at the Palace (now leridanizado as Palles). They were actors like Richard Harrison or Robert Woods. In all, about thirty western movies were shot. “Gunmen from Arizona”, “Five Guns from Texas” or “Oklahoma John” are, paradoxically, some of there titles. Salvador Gine has spent a long time recovering this era.

"People do not care to know in which film they participated, nor the director. In other cases the problem was the elapsed time, because the protagonists had already passed away ". One of the testimonies that Gine has counted on has been Pedro Federa, ‘El Rubio’. He had worked in a circus and his stunts made him a stuntman for twenty-eight films. This Lleida man came to earn a thousand pesetas (fifteen hundred for a fall from a horse, for example). A lot of money. So much so that it was established in Fraga. When there was no filming, he was dedicated to masonry. In 1972 the last spaghetti western was shot and Federa, who was hit by worm, dedicated himself to making traveling movies in Baix Segre and Baix Cinca. Other curious anecdotes that Gine has been able to rescue from oblivion is that in the cover of the film “Viva Carrancho” you can see Cardell's fragatina hermitage. "It is from the little that remains of those exteriors, because the highway has greatly modified that landscape."