Walker Strong as Ever After Skiing Accident [achieved newspaper article] 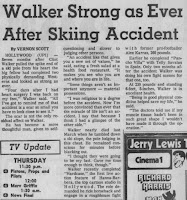 HOLLYWOOD (UPI) – Seven months after Clint Walker pulled the spike end of a ski pole from his heart the big fellow had completed two physically demanding Westerns and looked as strong as ever.

“Four days after I had heart surgery I was back on my feet,” Walker said. “All I’ve got to remind me of accident is a scar so small you have to look close to see it.”

The scar is not the only residual affect on Walker.

He has become a more thoughtful man, given to self-questioning and slower to judging other persons.

“An accident like that gives you a new set of values,” he said, eating a fresh salad at a health food restaurant. “It makes you see who you are and where you are in life.

“I was religious to a degree before the accident. Now I’m more convinced than ever that the miracle if life isn’t an accident. I say that because I think I had a glimpse of the other side.”

Walker nearly died last March when he tumbled down a ski slope, the pole lodging in his chest. He remained conscious for minutes before blacking out.

“I thought they were going to be my last. Gave me time enough to think though.”

Earlier he completed “Pancho Villa” with Telly Savalas in Spain. Only two months after the accident Walker was doing his own fight scenes for that one, too.

At 230 pounds and standing 6 foot, 6-inches, Walker is in excellent health.

“Being in good physical condition saved my life,” he said.

“The doctors told me if my muscle tissue hadn’t been in such great shape I wouldn’t have made it through the operation.”