There are characters from the spaghetti western that for various reasons, have had many substitutes, copies and tributes.

Django, the original by Sergio Corbucci, is one of them. There have been many films that have used such a striking name to try to emulate the iconic character that Franco Nero represented on screen in a sublime way, from Asian cinema with “Sukiyaki Western Django”, to Quentin Tarantino who marked a version with the character starring black actor Jamie Foxx. 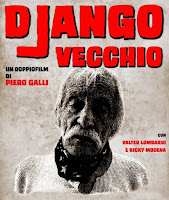 The penultimate Django also comes to us from Italy, “Django Vecchio”, the film directed by Piero Galli, a multidisciplinary artist who addresses an unprecedented and uncomplicated creative freedom from film, photography, fine arts or music.

We got in touch with Piero who kindly answered us some questions, and we will discover that deep down they are two films in one and that in the end he was able to add some images shot in Almería, although his first intention was to record it completely here.

What do you think your particular Django contributes?

“My favorite Django is still Sergio Corbucci's film from 1966. I have also seen the other Italians, about ten, but Franco Nero is unique, both for his looks, his charisma and the silence of a wounded man. Mine, first of all, is old (the actor is 90 years old). So, apart from the name, it has nothing else in common with the various "Django". Mine represents evil, he is a child of the devil, he kills at random, without sense, thinking only of himself.”

It has already been screened and is the DVD also available?

“The film is on sale only in Milan at the Bloodbuster store (also online), which specializes in genre and independent cinema. Only a few local cinemas show it on the big screen. The debut was on July 6 at the Cinema Sociale de Brescia. On July 21 it will be screened at the Hug in Milan. Then it is scheduled to participate in independent film festivals.”

The year 2020 has been especially difficult for the culture and has prevented you from coming to Almería to shoot, among other things. Tell us what happened.

“I had been in December 2019 in Almería to look for locations. My intention was to shoot most of the film on Sergio Leone's sets. I spent 5 days in Tabernas, getting up early in the morning to take long walks in the surroundings, visiting the still active sets and some famous hills. But then the covid arrived with the closing and closing of the borders. Luckily, I had brought a car in December and I shot some panoramic sequences that I included, but few things." 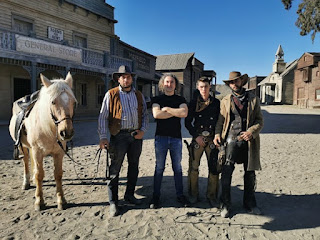 I'll tell you the truth: I've never liked the western genre. I found it boring, slow, useless. I've only liked "The Good, the Bad, and the Ugly" since I was a kid. And then I liked Bud Spencer and Terence Hill. The request to shoot a western came from a group of fans in Milan. So to prepare myself, I watched a lot of movies and now I can say that I really like spaghetti westerns. "Django" is a masterpiece, but perhaps the best is "Once Upon a Time in the West" The others with Franco Nero and the films with Giuliano Gemma are also good. Today's westerns don't appeal to me. Well Django from Tarantino, but nothing special "The Hateful Eight". I think the golden age is over. My film is just an unassuming 'tribute'." 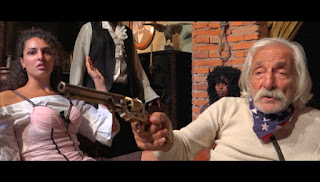 What does Django Vecchio mean in the whole of your filmography?

“In my filmography The old Django is a new step forward, an experiment that went quite well, where I also put some horror and some garbage (trash), as I like it. Every movie for me is an adventure. Gender change every time. I must say that the western was the most difficult, the most complicated to organize. The set designer worked a lot, building from scratch a tavern, a prison, and various things to put in the film. Then I had to find a "desert" that looked a bit like Almería. I had the weapons brought from Spain, then the Indian shop, the horses… Difficult, complicated, but fun!”

There is another familiar character in your film, which is Sartana.

“Django Vecchio is a double film, that is, the experiment of making two films in one. For about 1 hour it is "Old Django", then the theme of "Old Django challenges old Sartana" starts, then the movie continues with the new character of old Sartana. In the end, the closing theme is only one, for both films.”

What do you tell us about the acting staff?

“Yes, there are 46 actors. The main actor, Valter Lombardi (Django Vecchio), is a 90-year-old homeless man, whom I met on the street and with whom I have already participated in three films. He lives in Brescia sleeping wherever he can (public dormitories, banks, closed shops, friends' houses ...). His rival, Ricky Modena, is an 80-year-old former soccer player, now retired, dialect singer and cabaret artist. In the main role of the friar is Luca Gatta, professional actor and voice actor. Stefano Ethiou, the salon pianist "Uncle Tom", is a theater actor in Milan. Another professional actor is the Milanese Paolo Riva, who plays a gunman who is blind in one eye. Among women, I would like to highlight Priscilla Falchi, who already acted for me a few years ago, although she is not professional. Her role is that of the widow McBurger, which involves the Vegan brothers, to get revenge on old Django. The Vegan brothers are the actors Edoard Espen, Matteo Vinati and Tiziano Rochi. A small role is also for me, Piero Galli, in the role of a convict for robberies with dynamite.” 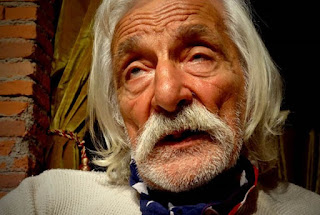 Finally, to get the film, which at the moment is not subtitled, you can search the web, or write an email to the specialized store bloodbuster.com in Milan.

Django Vecchio is a double film, that is, the experiment of making two films in one

Story: Two legendary gunmen meet but their old age prevents them from operating at the top of their games.