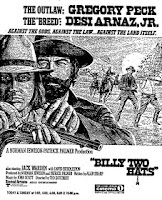 IN MOST action films the villains are not worthy of the heroes. Bad guys usually are less intelligent and complex that their pursuers because their smaller roles are carelessly developed by the screenwriters.

The evil forces in “Billy Two Hats,” however, are far more real and compelling than its heroes. Unfortunately, our interest in them runs counter to the direction of the movie.

Gregory Peck and Desi Arnaz Jr., an odd couple if there ever was one, star as a pair of good-at-heart, one time bank robbers pursued by an evil, racist sheriff and an equally bigoted saloon owner. The film’s best moments come when these two villains, who look to be in their 50s, reminisce about the good old days in the West when buffaloes and Indians were plentiful.

IN CONTRAST, the sheriff and his friend, find themselves chasing the half-breed Indian [Arnaz] and the transplanted Irishman [Peck]. After an initial success with a long-distance buffalo gun shot that nails Peck’s horse, the chase bogs down into a dusty and dirty business that relies more on inertia than passion.

When the action turns, as inevitably it must, to conversation between Peck and Arnaz, “Billy Two Hats” become vapid. And when young Arnaz strikes up a romance with a rancher’s stuttering mail-order bride, the action and dialog become positively embarrassing.

Screenwriter Alan Sharp, who was responsible for so many of the good things in “Ulzana’s Raid” [1972], is unable to provide anything meaningful or his heroic characters to do or say.

“Billy Two Hats” is somewhat notable for its Israeli locations, which save for one hastily planted cactus, double nicely for the American West.