New Blu-ray release: The Sartana Collection from Deutsche Austrophon GmbH - When is Sartana not Sartana: When Unscrupulous Distributors Strike!

I happened to run across this collection of Sartana flicks on Ebay, that were packaged together for German consumption. Most of the titles are indeed Sartana outings, no matter how tenuous, with a couple of non-ringers thrown. The German disturbing company, Deutsche Austrophon GmbH, actually only included four Sartana outings in their "Sartana Collection" DVD box-set 6 pack (July 19, 2018). They apparently had run out of 'official' Sartana movies, so they looked around for similar films. Too fill out the rest of their box-set they tossed in “Find a Place To Die” (starring Jeffrey Hunter) & “Aquasanta Joe” (Ty Hardin): two very non-Sartana Italowesterns that they had access to. Neither film cried out the name Sartana in any way! It reminded me of the earlier DVD release “Revenge of Sartana”. This obscure title was a Sartana film that was not an actual Sartana film. It had been magically retitled. It was a bogus Sartana. 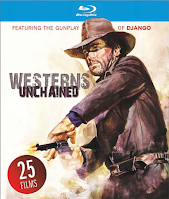 Most collectors will recall a collection of cobbled together spaghetti westerns on Blue-Ray, released as "Westerns Unchained" (VideoAsia - Alchemy - Millennium, December 4, 2012), This outfit had unceremoniously crammed 25 Spaghettis on to a single disk! The horror! It was their quick attempt to cash in on the wake of Tarantino's “Django Unchained”, that was taking audiences by storm. In their haste, they even forgot to audio-dub one of their titles into English, leaving it in Italian only (Execution). To the bewilderment of their buyers. Amongst the Spaghetti's listed on the back of the packaging was one “Revenge of Sartana”. Strangely this title would have stood out like a sore thumb to most collectors. It was a Sartana title, that most would not have recognized. And once viewed, it was apparent why. It was not a Sartana film in any stretch of the imagination. VideoAsia had simply made a rip of the earlier South African DVD from Southern Video, “Revenge of Sartana”. This release had very little distribution outside of a few devout fans. Southern Video had somehow gotten hold of a copy of the extremely rare “Murieta” (Warner Bros, 1965). This US/Spanish western was actually about the exploits of Mexican bandit Joaquin Murieta, not Sartana. It didn't even star Gianni Garko to comfort the viewer.

Collectors had been clamoring for “Murieta” for years. Naushad at Southern for some reason just retitled their print of “Murieta”. They knew the name Sartana sold. This deceptive move worked in two ways. It kept WB unaware, and gave Southern a new title to sell. At the time, 2010, on John Nudge’s Spaghetti Western Forum Board, which the owner of Southern was a casual member. There he reasoned that it was a good marketing move. Some agreed, others grumbled. Yes members wanted to see “Murieta”, but not under these circumstances. Southern's thinking was why not hustle a couple of extra copies on to unsuspecting viewers, and no one would be the wiser. Not WB in the least.

Now, back to the Deutsche Austrophon GmbH "Sartana Collection". Most of the German collectors that purchased this item would have realized that the final two titles were not in fact Sartana films. The listed titles were a dead giveaway: “Find a Place To Die” & “Aquasanta Joe”. Purchasers may have owned previous DVD releases of some of the real Sartana films, as these things warrant, and would have been on the lookout for ones they didn't have. They would have been happy to add these new releases to their growing DVD library, and replace their old VHS copies. Which we would and did. But, couldn't Deutsche Austrophon have done a better job of gathering together a group of actual Sartana films, or reduced the disk amount, and not been so sneaky. But then the most collectors were happy to have a new "Sartana Collection" to watch.