We begin our search for filming locations of “Run, Man, Run” (1968). Directed by Sergio Sollima and starring Tomas Milian as Manuel 'Cuchillo' Sanchez, Donal O’Brien as Nathaniel Cassidy and Linda Veras as Penny Bannington. This is the continuing saga of revolutionary Cuchillo which we covered in 1966’s “The Big Gundown”. Donal O’Brien replaces Lee Van Cleef as the main protagonist opposite Milian. The story concerns several competing groups and mavericks (including Cuchillo) who are hunting for a gold treasure of $3,000,000. The gold was reserved for the Mexican revolution.

As the film opens, we see a lone rider galloping on a white horse across a desert landscape. It’s Cuchillo who comes across the corpse of one of Diaz’s soldiers propped up and pointing to a group of villagers who have been executed and hung on a wall like trophies. Cuchillo pauses for a moment and then continues riding on. 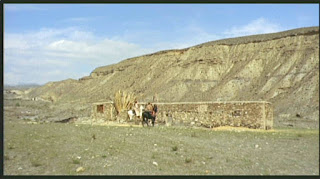 This scene was filmed near Tabernas, Spain.