And the Cetra Quartet sang of Cowboys and the West 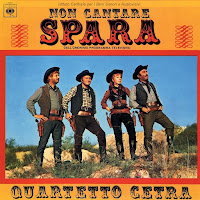 On March 31, 1952 Gino Latilla recorded in Italian a thrilling version of "Ghost Riders in the Sky", entitled "The Knights of the Sky". This wasn't the first time that something country-western had been played in Italy. Three years earlier, Lucia Mannucci, Virgilio Savona, Tata Giacobetti and Felice Chiusano, the famous Quartetto Cetra, had brought to success a witty country nursery rhyme, the one "On the Old Farm" which was none other than "Ohio (Old MacDonald Had a Farm)”, An English folk song that became very famous among the settlers of the Ozark region. The song, recorded for the first time by Gid Tanner and the Skillet Lickers in the 1920s, arrived in Europe with the eponymous cartoon by Walt Disney and the Cetra, who had already dubbed “Dumbo” for the American giant, took possession of it. They raised each verse by a semitone and completely rewrote the text, delivering it to the Italian tradition of children's songs (in the same film, among other things, the Italians also saw Donald Duck humming the famous "Oh My Darling, Clementine", already heard in 1946 with John Ford's "Infernal Challenge"). It is difficult, however, to identify a very early Italian country-western song. It is in fact very likely that, under the guise of a brazen swing and frowned upon by the authorities, already in the Thirties something had circulated in the Bel Paese. That swarm of young artists inspired by American vocal ensembles, girl groups and jazz bands - such as the renowned Trio Lescano.

However, Cetra had a key role in the diffusion, not only of swing, boogie and rock and roll music, but also of country-western sounds. The quartet, in fact, repeatedly celebrated in its songs the whole social and musical history of North America, recalling, alongside Rudolph Valentino, Sinatra and the elements of the Dixieland imaginary, even the cowboys, the Indians, Tom Mix and Jesse James. Take for example songs like "Old America" ​​and "I Know a Cowboy Over There in the Farwest". They were two hits that gained great popularity. The first piece was a lively composition by Lelio Luttazzi that moved from swing to the evocation of “Oh! Susanna” and it was sung from the balcony of the last car of a little train that crossed Arizona during the magazine 'Gran Baldoria'; the second, written by Anton Virgilio Savona, sounds a bit like a Sioux tease today, but the refrain was really catchy. Also famous was "Johnny Smith's Backpack" from 1954, an amusing story by a unionist soldier from Tennessee, leaving to fight General Lee in the name of Lincoln, who, however, cannot help but think of his beloved Mary ... a cow.

On the same snappy and playful wavelength, Natalino Otto sang of Southern planters, gold diggers and Kansas City-style cowboys in “And America was Born Like This!” future, they were already moving towards rock and roll, they had recorded a version of "Rock Around the Clock" and, curiously, they had bent their vocal cords to the Neapolitan accent of "Pummarola Boat" and "Piedigrotta on Broadway" in the same seasons in which Renato Carosone, moving away from the jazz paths beaten with fidelity by Buscaglione, experimented with “Tu vuò fa 'l'americano” and “' O pellerossa”. The quartet, now tested in hilarious parodies, returned to western sounds in 1962, with "The Ballad of Lazy Boy" to tell the story of a good boy who ended up in the turn of Jesse James. 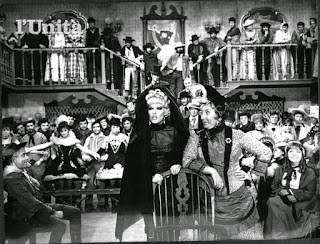 The association between the western and the Cetra, however, was perfected in 1968 when the four were the protagonists of a hilarious parody western, a television show that, for six weeks, kept Italians glued to the screen. It was a seven-part series entitled “Don't Sing, Shoot”. The show, written by Leo Chiosso on a subject by Giacobetti, enjoyed the music of Gianni Ferrio, composer of the spaghetti-western "One Silver Dollar", "Massacre in the Grand Canyon", "Three Dollars of Lead", "Viva la muerte ... tua ! " etc .. The theme song was entrusted to Giorgio Gaber who played in the role of Idaho Martin, known as the Mestizo. Under the direction of Daniele D'Anza, alongside the Cetra (the Four Westeners), in this musical, set in an unimaginable (more than imaginary) Abilene, actors of the caliber of Nando Gazzolo, Aroldo Tieri, Renzo Palmer, Luigi Vannucchi and the beautiful Luisella Boni, Valeria Fabrizi and Isabella Biagini. Mina also figured as a saloon singer. Shel Shapiro's Rokes were called to play the weird Cherokee Indians. It was all filmed at Toifa and Manziana, about seventy kilometers above Rome, in the same locations frequented by Sergio Leone, in Cinecittà, in the "western village" and in the "Mexican village", and again in Grottarossa and at the TV Production Center in via Teulada in Rome. The show is still today one of the most successful examples of Italian television creativity, a western satire, made up of grotesque and Pirandellian situations and sensational brawls, unlikely shootings and hardly credible toughs, which opened the genre to irony and anticipated Corbucci, Petroni, Castellari and Carnimeo and the successes of Bud Spencer and Terence Hill. The Cetra Quartet was the master and recorded all the songs for the Curci musical editions, including the homonymous “Don't Sing, Shoot”. (Angelo D'Ambra)