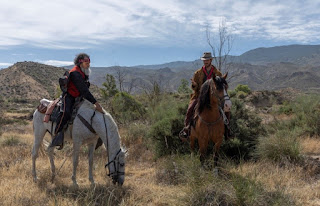 [Still from the new 'western' by Manuel Olaya.]

After the international recognition achieved at independent festivals around the world with “Arizona 1878”, which won more than fifty awards and 90 official selections (more than 15 in the USA), the Albacete director Manuel Olaya is already embarking on his new project, a new western entitled “Infortunio” and has just shot in Almería in the absence of some sequences still pending.

“They say that the human condition is marked by greed and greed kills. “Infortunio” is a short film where the plot or conflict is generated by a Wells Fargo treasury, which is possibly the main protagonist of the medium-length film. I want to show that the western is not a dead genre and it will still give a lot to talk about, it may not be its time yet, but I am confident that it will be reborn again; in this film I must confess that I include nods to the cinema of John Ford and Sam Peckinpah, two of the best directors of the genre.

Olaya assures La Tribuna de Albacete that he keeps the aesthetics and production design of his previous short film and the filming carried out recently in Almeria was a teaser or trailer, “with which we plan to make a crowdfunding campaign on social networks, to try to get funding from sponsors or producers who want to collaborate to make the project much bigger”.

The Almanseño director is very grateful to the Oasys MiniHollywood theme park and film set, especially to its manager José María Rodríguez Linde for his sponsorship of this work, where it was filmed for a whole weekend. “It is an honor and a real pleasure to have shot in one of the best cinematographic sets in Spain, where Sergio Leone to Álex de la Iglesia have filmed their great productions, today it is still open offering the visitor some shows and the visit to its great animal reserve”.