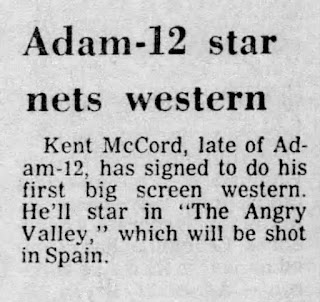 Kent McCord, late of Adam-12, has signed to do his first big screen western. He’ll star in “The Angry Valley,” which will be shot in Spain.

[Mike Ferguson: Might be A Man Called Blade which was called El Valle de la Muerte / The Dead Valley in Spain. It was one of the few westerns being made in 1976. It started filming in February 1977 but, was shot only in Italy. They could be the same films? Perhaps someone who knows Mr. McCord will ask him.]