Who Are Those Guys? ~ Husein Cokic 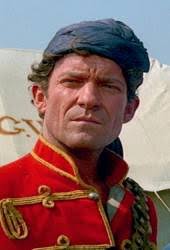 Husein Cokic was born in Kljuc, Bosnia and Herzegovina, Yugoslavia on June 16, 1931. He’s remembered as a film, television and theater actor as Will Parker in a red jacket from Vinnetou I. He then appeared in other films such as Face to Face (1963), Marš on Drina (1964), Dr. Mladen (1975), and others. He also worked successfully in many co-production films and television. His acting career began in 1962 when he appeared in the film “Kozara”. He would go on to make appearances in 41 film and television series ending with a final appearance in 1989 as Zmajevic in the film Iskusavanje djavola. He’s best remembered by Euro western fans for his appearance as Will Parker in 1963’s Karl May film “Apache Gold”. Ten years later he appeared in the TV series “The Jack London Story” as Jim Goodman/Gustavson which was made into a film and released to Italian theaters that same year.

As far as I know he’s still alive and living in Croatia.