We continue our search for filming locations for “Day of Anger”. Scott is drinking at the bar and Abel tells him that he was the first to recognize Scott’s potential and to excuse him for his actions. Scott orders him to bring him the broom. Nigel comes in and tells Scott to go to the stable. Scott tells Nigel to go first as pigs fo before.  Nigel tells him he needs a beating with a big stick. Scott says he used to have a big stick and as Able comes back with the broom, Scott demonstrates his ability with a pistol and shoots the handle into splinters. Then Murph walks in and tells Scott to come away and go with him. Scott tells them all to go to hell. 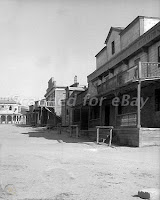 Filmed at the Cinecitta western set saloon in Rome, Italy.

For a more detailed view of this site and other Spaghetti Western locations please visit my friend Yoshi Yasuda’s location site: http://y-yasuda.net/film-location.htm and Captain Douglas Film Locations http://www.western-locations-spain.com/
Posted by Tom B. at 6:56 AM