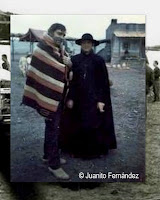 A photo like this, sent by his son for our tribute project to the Almerian figures , could not be that of a normal and ordinary extra. Behind a photo with a great actor like Burt Lancaster, there had to be a story and, most likely, it should not be a professional resume but rather a question of friends. And so it is.

This occasional helper is none other than Juan Fernández Muñoz, a member of one of the most recognizable families in the film history of Almería, present from the beginning (his father, Diego, was one of the pioneers) and to this day, with four generations already in the profession of cinema.

In parallel to the evolution of this family, you can tell, almost without leaving anything out, the entire history of the cinema shot in Almería.

But today we will only focus on this privileged "helper".

Juan Fernández worked as a driver from a very young age. His expertise, also crucial later with filmmakers, allowed him to continually rub shoulders with engineers and senior officials, civilians and military. During his military service in Almería he already helped his father a few times but it was when he finished the military that he definitively dedicated himself fully to the cinema. 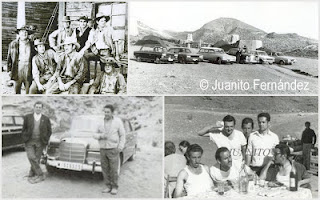 Without knowing other languages, he knew how to cope very well among the 'film makers' that were beginning to come to our land, first only as a driver and later as a 'location finder', thanks to his great knowledge of the entire province. His great asset was always that he drove very well (Alfredo Landa once told him: "going with you as a driver is like riding on the wings of an angel) and that is why he was one the greatest drivers for: Sergio Leone, Clint Eastwood, Eli Wallach, Claudia Cardinale, Raquel Welch, Catherine Deneuve, Tonino Valerii, Gil Parrondo, David Carradine ... the list would be endless.

Since he started in the world of cinema, in 'Lawrence of Arabia' (David Lean, 1962), until his last work, in the TV series 'Queen of Swords' (2000), it was almost forty years and an endless list of titles, in which he played various facets as driver, locator, production assistant and transportation manager.

With a cassette that he carried in the car and talking to people, he learned to teach himself English, he spoke Italian and, fundamentally, made himself loved by the artists he worked with. From there came these cameos, from friendship and a good atmosphere.

Very special was his relationship with the Italian director Sergio Leone, known for his perfectionism and his demand on his entire team. When the tension of the filming made him nervous, sometimes giving rise to that particular gesture of opening and closing his hands - which was nicknamed 'the castanets'-, Sergio Leone said to his driver: "Juan, get me up to heaven" And that meant taking him to one of those high places in the Tabernas desert that the Roman filmmaker loved so much. A few moments in the area of ​​La Sartenilla served as a balm to calm the nerves. That phrase, known to most fans, shows the relationship of professionalism and trust that always marked the work of Juan Fernández with some of the greats in the history of cinema.

His relationship with Clint Eastwood and Eli Wallach was also close, especially in Covarrubias (Burgos), a place where Juan Fernández traveled with his young pregnant wife to work on the shooting of 'The Good, the Bad and the Ugly' in the area of Arlanza. During the summer of 1966 they shared family walks in the afternoons and free moments when not filming. Precisely, in an emblematic place in that region, the Sad Hill Cemetery, this simple memory of himself and that experience has been appearing for a few months.