The third part of a large interview with American actor Lex Barker, which he gave at the end of 1964 in Yugoslavia during the filming of Karl May 's film “The Treasure of the Aztecs” . A word to journalist Dirk Fond from the German magazine BRAVO : 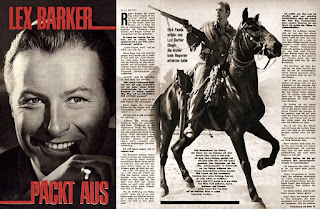 
Dozhd, rain, rain in Dubrovnik is already the fourth day! I got up in a good mood and went in search of Lex Barker to have breakfast with him calmly. The film crew can't shoot in the rain, but I can talk to Lex perfectly in the rain.


He stood by the window of the living room, which was part of his luxury apartments in the Villa Scheherazade.


“Great shower, isn't it?” I exclaimed cheerfully and entered.

His figure stood out powerfully against the window. He did not turn around.
Great? Do you know that every raindrop is like a fallen and rolled somewhere pfennig? Each drop costs the film company money, hundreds of brands, thousands, tens of thousands, and so on to infinity ...

“Of course,” I answered, embarrassed, but delighted.

With every shooting day lost, the situation is getting desperate. I have a fixed departure time, I need to go to Bangkok to shoot another movie. But what about the Aztec Treasure?

I stood next to him by the window. We were silent. Then I said:

- Sadly, flooded with rain, Dubrovnik must be the dullest city on earth.

Barker twisted the corners of his mouth. He asked:
Do you know Pittsburgh?

I shook my head.

Pittsburgh is a grim city. Rainy or sunny. Dirty, and, in general, the most nasty. After a couple of hours, the white shirts there are already black, and the hair is just disgusting. There I started as an apprentice.

I want to tell you how it was then.

My father's construction company was fulfilling an order at the Pittsburgh Steel Mill. Father sent me there. “You’ll start from the bottom,” he told me. “I don’t have any other way.”

“Hey you, Hollywood hope,” they shouted to me. “Come on, gop-gop, quick, or maybe Mr. Boss’s son is too gentle for such things, right?”

I had to run. Well, I was pretty big and athletic, but working on a construction site required the wrong muscles as in sports. I had to grit my teeth. I don’t know where they sniffed from, that I have a contract with Fox Studio. They also knew that before I, obeying the will of my father, also gained theatrical experience. I played in one play - it was called "Five Kings" - directed by Orson Welles. But she failed in the province and never reached Broadway.

The guys from the construction site loudly scolded at any mistake during work, as if I were always to blame. I was no stranger to such “humor”.

At 17 o’clock the working day ended. I did not go with the workers to the nearest corner pub. It is clear that they considered me a pompous pride, squinting under their boyfriend. But I could not do anything - at 19 o'clock in the evening school my engineering training began. There I cursed my bad grades in math. At school, I would have mastered everything with a tenth of energy that I now needed to drive into my brain after work. The curses, unfortunately, didn’t help. Awareness came a little later.
At 22 o'clock the school was over, and I literally was cut off in bed. And in the morning at 6 o’clock again rise - and to the construction site. This went on for a whole year. Hell time.

Then my father began to send me on short business trips. I well remember one manager who once called me to him:

“Mr. Barker, I have to complain about your expense reports.”

“I don’t understand,” I objected, “I have everything counted to the last cent.”

"Exactly! He raised his voice. - To the cent! It seems that you generally spend only cents. Everywhere the cheapest hotel, the cheapest food, the cheapest transportation costs. What do you think of it?"

“Ah! But you don’t think about your colleagues who spend more and look like squanders ... And you don’t think that you are a very bad advertisement for your father’s company when you stay at a suspicious hotel? So please spend more money!”

Later, similar things will happen to me repeatedly. In Hollywood But then, in a construction company, I supplanted all thoughts of Hollywood, Broadway and my acting career. I had to become an engineer. Yes, I will be an engineer. Two years later, I passed the exam for a civil engineer. And then - a pause for several years.”

Lex Barker took a cigarette from his pocket and lit it.

“Have you been called?”

With exasperation, he inhaled deeply with cigarette smoke:
The war is over, everything is in the past. Let's leave it.

“But these are the years of your life, Lex.” You just can't get around them ...

Maybe. But do not forget - I fought against the Germans. Today the children of my enemies then are my fans. I wouldn’t want to ...

I understood his feelings. But I did not give up, I made him understand that, in the end, his fans know why the war started, why people began to shoot at each other.

MEMORIES OF THE WAR

Quite a lot of time passed before he “split” and told about his military experience. True, not very decisively, inconsistently. And yet he frankly confessed to such things that he had not yet revealed to any reporter.

In 1941, shortly before the United States entered World War II, a young civil engineer, Lex Barker, joined the army as a volunteer.

Not because I'm such a great patriot. Being a volunteer, I had to serve only one year. I, so tall and athletic, would still be called upon. But then the war began, and I remained in the army for a longer time ...

After initial military training at Fort Benning, Georgia, he attended officer courses. It was a family tradition. All his English ancestors had high officer ranks. In a war, you could quickly become an officer. Already at the end of 1941 he was given a lieutenant, he became one of the ten best graduates of the courses. At Fort Benning, he served as an instructor until he was noticed by one of the illustrious generals of World War II, Mark Clark, who promoted him to first lieutenant and made him his adjutant. With the 2nd US Army Corps, Barker arrived in England. He spent only six months there.

General Mark Clark did not find a common language with me - and I did not get along very well with him. He allowed himself to object ...

First he got into the 1st Infantry Division and then landed with her on the North African coast, near Algeria. In a battle with the German African Corps, Commander Barker died in his first battle. Lex took command, with the result that he unexpectedly became the youngest captain of the American infantry.

For about a year and a half he fought on the African front, and then again found himself in the invasion corps. This time the goal was Italy! 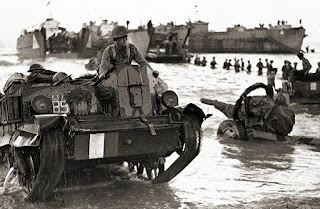 He fought in Sicily, then in mainland Italy. He was wounded there. Tangent gunshot wound to the head. The orderlies who carried him away, glancing briefly at his bloodied head, silently gave a sign: he was no longer a tenant. They were very surprised when, just three months later, they again found Captain Barker, who was removed from the list of living, at the front.

“How is this possible, sir?” They babbled.

Just. A hospital doctor closed a hole near my temple with a small silver plate. The skin was cut off, sewn up - and done. Since then, my head was considered the most valuable in the division ...

In fact, the scar miraculously healed. Lex Barker wears a silver plate in his head to this day.

And again he is at the forefront. As before. Only with a little difference. He was no longer a captain. He became a major.

Shortly before the end of the war in the battle of Anzio, he received a second wound. Shrapnel crushed her leg. Major Barker was transported by ship across the Atlantic and taken to the famous military hospital in Arkansas. There he lay from May to August 1945.

Then he was fired from the Fatherland with honor and gratitude from the Fatherland. Lex came to New York and thought about the future. What does he need? He is healthy, injuries did not leave any incurable damage, and he longed for activities that would have nothing to do with war and soldiers.

[One of the first meetings after the war. Senior Barker is proud of his offspring /
© photo from the book of R. Boller, C. Böhme: Lex Barker - die offizielle Biographie]

Work again as an engineer? To this he did not feel the slightest desire. In New York, he was worried everywhere about past memories. About how he tried to gain a foothold on Broadway. About how he was found by a talent seeker for the film company “XX Century Fox” and how he received the film contract she proposed.

Fox! Of course! In the end, the company still exists. Maybe they are looking for talent there again? Lex went to Fox's New York office in search of people who could still remember him with his first movie screenings. He did not find them. But he found Simon Burke.

“Lex Barker! He exclaimed. “It's good that I met you, Lex.” I have long wanted to talk with you. You fired my son from the army.”

Lex stared at the temperamental man.

“It is clear that they were! - inspired by Simon Bourke. “My son was a worthless and worthless soldier shoved into uniform.” I then bombarded all military authorities with requests to release him from service. And you really did it! You probably saved my son’s life by doing this. In his unit, later almost all died. Come on, Lex, what can I do for you? ”
Lex told what he could do. And it worked. A few days later, Lex Barker again stood in front of the camera at the movie screenings at Fox's New York studio. Everything happened on November 28, 1945, and he will never forget this date.

Everyone would have dreamed of such a turn of events ... A short telegram came from Hollywood: “The test passed - point - Urgent come to Hollywood - point - We have a role for you - point -“ Fox ”.

After a couple of hours, Lex got into his old car and rushed across the United States to the shore of another ocean. He still wore a military uniform because he did not even have civilian clothes.

Barker was on the road for four days, for four days he was driving and thinking only about one thing: Hollywood, where he was waiting for a movie role ...

But, as it turned out later, this was a small delusion. No roles were foreseen for Lex Barker. But waiting for a seven-year contract. The conditions for the newcomer Barker were not so bad. He was offered $ 500 a week. In return, they were given the task of renting a decent villa, driving a first-class car, appearing at important parties, smiling kindly to every journalist and showing themselves to any camera in a favorable perspective.

It was all very beautiful. However, a few weeks later, Lex became worried. He didn’t come to go to important parties, he came to play a movie!

About six months later, he finally received the news: “You have a role. Contact director Sai Endfield."

Lex Barker was jubilant. It turns out that they were still waiting for him. In the frame, he managed to utter one single phrase. Almost the most expensive phrase in the history of cinema. A phrase worth $ 12,000 ...

So began his film career. 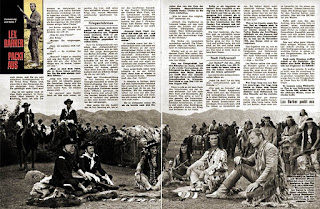