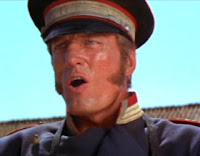 South African born actor Hans Meyer died in  Neuilly-sur-Seine, Île-de-France, France on April 3, 2020. He was 94. Born to German parents Hans was born in Paulpietersburg, KwaZulu/Natal, South Africa on July 21, 1925. He worked initially as a model where he posed for book covers until a friend in Germany working for an advertising agency lined up his first work as an actor, a television advert for Puschkin Vodka. The brand became Germany's best selling vodka and Meyer became known as "Frank S. Thorn" The Puschkin Man. He was hired by Anatole Litvak as an extra for his film The Night of the Generals. In the 1960s, he played supporting roles in numerous French films alongside French cinema stars such as Lino Ventura, Alain Delon and Jean-Paul Belmondo in such films as La grande vadrouille, The Devil’s Garden, Les Étrangers and Barry Lyndon. Meyer appeared in Steven Spielberg and George Lucas's The Young Indiana Jones Chronicles as well as the French cult movie Brotherhood of the Wolf. He played Svedborg in his only Euro-western 1970’s Cannon for Cordoba.
Posted by Tom B. at 10:44 AM