Throughout history, there have been thousands of footballers who, after hanging up their boots, have continued to be linked to the sport, directing changing rooms or working in offices, but very few have gone from grass to celluloid. One of the most striking cases is that of the Paraguayan international Florencio Amarilla, who, after playing in the top two categories of Spanish football, became a regular in the "Spaghetti westerns" shot in the Almería desert in the last decades of the last century.

Paraguayan Florencio Amarilla (Colonel Bogado, January 3, 1935) went international 31 times and went on to play in the World Cup in Sweden in 1958, scoring two goals in three games, a performance that has just risen to his country. The striker landed in Spain just a few months after finishing the World Cup to join the ranks of Real Oviedo, a club in which he spent three seasons playing in the First Division. After a subsequent passage through Elche, also in the elite, he defended the shields of Constancia and Hospitalet, both in Second, before signing for UD Almería, where he settled definitively and where he became a regular extra in western movies shot in the desert of this Andalusian province. A footballer turned into a secondary actor who worked with such important figures as Yul Brinner, Alain Delon, Charles Bronson or Ursula Andress. 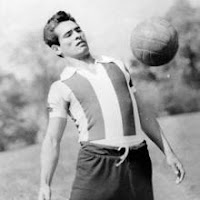 With enormous speed on the grass and a tremendous kick, Amarilla lived his great sports night on July 14, 1957, the day that Paraguay and Uruguay were fighting for a place in the World Cup in Sweden 58. The striker's performance, the author of three goals (5-0), was decisive for his team to get the ticket for the World Cup, the prelude to his arrival in Spanish football. After his stay with several teams, he retired to Almería, where he established his residence and where he ended up casually entering the world of cinema. “I was at the Grand Hotel having a beer. I was approached by a two-meter-tall man, Antonio Tarruella, an assistant director, and when he saw me 'Indian face' he asked me if I wanted to participate in a movie, ”explained Amarilla, a man of few words, before his death, in 2012. That film, “100 Rifles” (1969), starring Raquel Welch, Jim Brown and Burt Reynolds, was his first filming as a supporting actor. His role, usually, was always the same, that of the Indian chief, favored by the features of his Guaraní face, his physical power and his skill in riding a horse.

In the heat of the explosion of "Spaghetti westerns" the contracts followed one after another, taking parts in films like "El Cóndor" (1970), with Lee Van Cleef; "Catlow" (1971), with Yul Brynner; or "Chato’s Land". Amarilla ended up participating in nearly dozens of Hollywood westerns and some legendary films such as "Patton", a film in which became the first Paraguayan to win an Oscar, because this production won the statuette for "Best Film" (1970).

Despite his foray into film, Florencio Amarilla never abandoned football and, like many other colleagues, he worked as a coach, training modest teams in the province of Almería such as Roquetas, Mojácar, Vera, Garrucha and Polideportivo Ejido. In 2006, at the age of 71, he worked as a utillero in the Comarca de Níjar Club, living on the premises of his stadium.

Florencio Amarilla, the soccer player-actor, died in August 2012, at the age of 77, in Vélez Rubio (Almería).