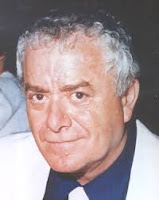 RIP Mario Donatone. Italian character actor Mario Donatone died April 14, 2020, he was 83. Cast by Francis Ford Coppola as a hitman it The Godfather - Part III, and an unfailing presence in almost all the movies with Tomas Milian, as well as film, TV actor and theater director he was born in Tripoli on June 9, 1933. He appeared in over 150 films, and worked with famous directors, but the role for which he is best remembered is that of the assassin Mosca, the fake priest who in Francis Ford Coppola’s The Godfather - part III (1990) shoots Michael Corleone (Al Pacino). Donatone was also a theater director and writer. Mario appeared in only one Euro-western 1973’s “Bad Kids of the West”.
Posted by Tom B. at 12:35 PM