The town folk gather in the street after the Mckenzie and his men have been shot and killed by Talby and Scott Mary. The doctor examines the dead and tells the Judge Cutche he’ll probably have to acquit Talby once again for shooting in self defense. 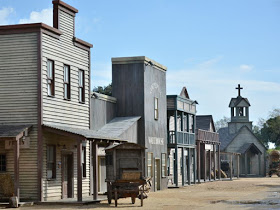 This scene was filmed at the Cinecitta western set in Rome, Italy.