The town of Nuevo Baztán, Spain is 46 kilometers east of Madrid and is an interesting example of an urban complex created from scratch in a rural area at the time of King Philip V. It was built on the initiative of the industrialist Juan de Goyeneche, whose family was originally from the valley of Baztán, in Navarre. The project that was based on French examples of the first industrial age, was entrusted to one of the most famous architects of the Spanish Baroque: José Benito de Churriguera, who built the main buildings - the church-pa-fazzo complex - between 1790 and 1713. Around this nucleus a perfectly perpendicular road network developed with houses and workshops (where glass, ceramics, textiles, soap was manufactured), which remained in operation until 1752. Behind the main palace there is a square, closed on Four Sides, known as "Plaza de toros o de fiestas", which is accessed through two stone doors, which was used as a set in “The Hills Run Red” (1968); “The Return of the Seven” (1966); “Sugar Colt” (1966) (as the Southern Colonel's ranch that holds the soldiers and their captured prisoners); “Texas Addio” (1966); “A Man and a Colt” (1967); “Up the MacGregors” (1966) (the scene of the spectacular clash in the lair of the Mexican bandit Maldonado in the final part of the film); “The Mercenary” (1968); “Long Live Your Death” (1971); “The Genius” (1975) (in which it represents Fort Cristobal); “Zorro” (1975). 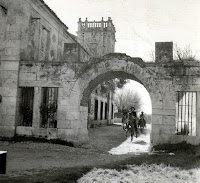