Interview Belén Mateos Járrega - Giuliano Gemma. A Land, a Sword and a Gun

ONE OF THE THINGS I MOST REPENT TO IS NOT HAVING DONE SOMETHING WHEN GIULIANO WAS ALIVE, BUT I KNOW THAT WHEREVER I AM HAS HELPED ME BECAUSE I AMAZING WITH ALL THE PEOPLE I HAVE TALKED WITH

The first time I met Belén Mateos Járrega was during the celebration of one of the Almería Western Film Festival events where the figure of Giuliano Gemma was remembered. I remember that he spoke very naturally and from the heart of his memories about the mythical actor sitting next to his father, who was the architect of her feeling that passion for the western genre, and about this particular performer. I felt very identified with that family inspiration and later became a personal enjoyment that has been reflected in this fantastic book entitled «Giuliano Gemma. A land, a sword, and a gun ”that we discussed with her in this interview.

Q:  What peculiarity of this actor caught you so much that this first book was about Giuliano Gemma?

Belén Mateos Járrega:  This passion comes to me for my father. Actually, since I was little I liked another actor who was Christopher Reeve, the one from "Superman", but of course later thanks to my father who likes movies a lot because I was fond of Giuliano Gemma's films because the peculiarity that Giuliano has is that it is very handsome, that is clear and the beauty is obvious, but especially because he embodied a very unsympathetic character. So this is what attracts, I think not only me, but also the children. He is a type of character that interests because he is rogue, he is an action hero, Mediterranean, bluster and I liked that a lot when I was younger. I think it was more for that.

Q:  You have done it in a very interesting way, getting closer to his figure from the interviews you have done with professionals who have worked with him in Almería, where he spent most of his film career, in addition to talking to his own family.

Belén Mateos Járrega: What was clear to him is that there must have been testimonies from people who knew him and above all who worked near him, particularly Spaniards. In principle, what I wanted was to speak to Spaniards. Then of course I realized that the Italians also had a lot to tell because there were people like Neno Zamperla who worked here with him in Spain, and who could contribute a lot. In fact it is one of the ones that has contributed the most because it has also helped me. He always said to me, "You call me when you have a question, whatever or you want to contact someone", and I called him and he helped me like Diego Rodríguez here in Spain. They have been my two props. In Italy, Nazzareno Zamperla (Neno Zamperla) and in Spain, Diego Rodríguez in Almería. In the end I did it with the Italians too because they had a lot to tell about that time, they worked here with him, and they transmitted and reflected that stage very well. They told anecdotes and I found it very interesting.

Q:  Giuliano Gemma's career in Spain influenced many of the people featured in the book

Belén Mateos Járrega:  That also interested me a lot, the relationship between Spaniards and Italians because apart from that, in general, we are very similar. I remember, for example, when I was talking to Mónica Tessari, the daughter of director Duccio Tessari, who related Andalusians to Sicilians, saying "they are very kind people." I really liked that. To be able to write about the cinematographic relationship between the Spanish and the Italians, that is something that still interests me and that I will surely continue to shoot around.

Q:  This first book has encouraged you then, in addition to becoming a challenge

Belén Mateos Járrega:  What happens is that I thought a long time ago that I had many contacts and that I could do something. One of the things I regret the most is not having done something when Giuliano was alive, I have that thorn there but I know that from wherever he is he has helped me because I hallucinate with all the people I have spoken to. There are even more people than if a second edition came out, because I could even add things to it because there are people who later told me that they could have contacted them, because they found out after the book.

Q:  My thorn, for example, was fulfilled by you who was interviewing Álvaro de Luna.

Q:  I have discovered things that I did not know about Giuliano, for example his participation in Spanish films and that he had been in Malaga filming in the Jardín de la Concepción

Belén Mateos Járrega: You  had to vindicate your cinematographic work here in Spain, but it has made about 30 films. 40 years he has been working like this. When he spoke to Neno Zamperla, who were close friends and Giuliano always demanded it in his films as his weapons master, and for that reason he is also known in Almería, he said to me "it is that he and I have spent our youth there." And it's true. That had to be removed from oblivion because Giuliano was a very popular character at the time, in the 60s and 70s in Italy and Spain. In the Spanish press it was seen.

Q:  How much time have you spent making this book?

Belén Mateos Járrega: Like two years. And the truth is that it could have been more. The final part was quite difficult for me because it was like reviewing and getting the photographs, and it coincided with a stage of my personal life because I got pregnant and I was resting because I was about to lose the girl, so I had a time that I couldn't write or do anything because I couldn't move. Of course I was thinking when it will be impossible to give birth to things, so the review and the photographs were a bit fast. It has cost me and I have invested a lot of time, but I have really enjoyed it because I have made friends also thanks to Giuliano and it has been wonderful to be able to speak with all these people, not only those from the interviews, but also the testimonies. Some testimonies could have been interviews but of course there are already 19 interviews in the book,

Q:  The best way that I think there is to meet a professional like Giuliano is to speak from love as you already showed on your website, "By ceiling, a sky of stars" and not from an elitist position reviewing his biography.

Belén Mateos Járrega:  The work I wanted to approach from two points of view: the professional (his work in the cinema) and also his human side (the human dimension). All the interviews end with the same question: "What was your opinion of Giuliano Gemma from a professional and personal point of view?" They all ended like this because they were the two points of view from which I wanted to approach this study about his career.

Q:  Where can we get the book?

Belén Mateos Járrega:  Through the website of the publisher that is Dilatando Mentes you can get it. And in bookstores if the book is requested they can bring it to you.

Q: You  will have the literary fever, will more books come?

Belén Mateos Járrega:  We will see. I wanted to start with Giuliano and I have succeeded thanks to my editors who trusted me. Because Giuliano is not only an icon of the western, he is the king of the western to the Italian that they consider it so in Italy, if not also that it crosses all genres. He was an action hero, Giuliano was a Mediterranean action hero, the angel face that was his pseudonym and that I think yes, it is worth knowing because in his time he was well known, and we must remember him thanks to his cinematographic work And then thanks to the people who collaborate in the book, I thank them very much for their contribution. 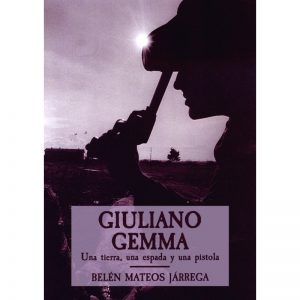