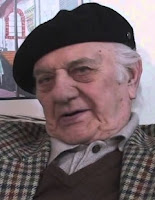 Set, dresser, costume designer, art director and production designer Carlo Leva died in his hometown of Bergamasco, Piedmont, Italy March 4, 2020. He was 90. Born in Bergamasco on February 27, 1930, along with architect and set designer Carlo Simi, Leva was a guiding force in the look of the Spaghetti westerns for Sergio Leone and for others of the genre. Leva worked on all of Leone’s westerns as well as “The Big Gundown” (1966), “The Price of Power” (1969) and Terence Hill’s ‘Lucky Luke’ (1991-1992) TV series and film of the same name. He was honored at the showing of “The Good, the Bad and the Ugly” shown at grand opening of the reconstructed Sad Hill Cemetery in 2016.
Posted by Tom B. at 9:05 AM