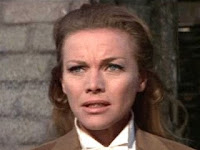 Honor Blackman, the actress best-known for playing Bond girl Pussy Galore, has died aged 94. She became a household name in the 1960s as Cathy Gale in The Avengers and enjoyed a career spanning eight decades, died of natural causes at her home in Lewes, Sussex, England on April 6, 2020. Among Blackman’s better known roles were the vengeful goddess Hera in “Jason and the Argonauts” and as Laura West in the 1990s sitcom “The Upper Hand”. She appeared in theatrical productions including “The Sound of Music”, “My Fair Lady” and “Cabaret”. Blackman was married and divorced twice, to Bill Sankey and Maurice Kaufmann. She adopted two children with Kaufmann, Lottie and Barnaby. She turned down a CBE in 2002 while ,ore recently, she joined a campaign to demand compensation payments for pensioners who lost savings in the Equitable Life scandal.
Posted by Tom B. at 9:40 AM