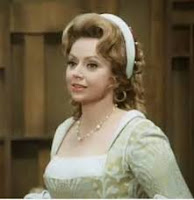 Opera singer and actress Arlene Saunders died on April 17, 2020 from the COVID-19 virus. She was 84. Saunders appeared in various roles at the New York City Opera House before traveling to Europe where she became a fixture with the Hamburg Opera. She retired from the stage after 20 years at the Teatro Colón in Buenos Aires. Arlene appeared in one Euro-western while living in Europe and that was as Mrs. Londonderry in 1968’s “The Longest Hunt” starring Brian Kelly and Fabrizio Moroni. She was billed as Arlene Sanders.