Who Are Those Guys? ~ Feridun Çölgeçen 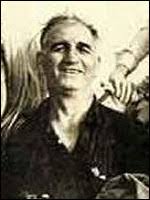 Feridun Çölgeçen was born in Istanbul, Turkey on May 11, 1911. He was the son of Sami Bey a deputy of the Republic. He graduated from Ankara Gazi High School. He left the Conservatory around 1936 to take theater coursese in Germany, Belgium and France. To make a living he worked in the FDI Central Bank, the State Railway and as a French teacher. His first film appearance was in 1933 in “Cici Berbera” with a small supporting role. In 1935 he became a professional theater actor with Targetless Buseler in Raşit Rıza where he worked at the Nejat Uygur Theater. He acted in several European countried and in 1957 came to the United States where he appeared in the film ‘Timbuktu” starring Victor Mature and Yvonne De Carlo and directed by Jacques Tourneau. Also “A Certain Smile” with Rosanna Brazzi and Joan Fontaine. Çölgeçen founded United Artsits Timbuktu Productions and appeared in ore than 400 films during his career. Speaking five languages he also worked as a film dubber on 20 films. He was married and divorced twice and died in Istanbul on January 19, 1978 from a heart attack, he was 67.