Who Are Those Guys ~ Franz Colangeli 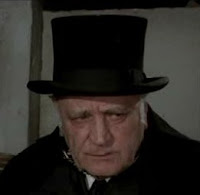 Almost nothing it known about this often used character actor/extra who appeared in dozens of Italian films from 1950 until 1978. Most likely born in Italy somewhere in the 191? as he appears to be middle age when we first see him in “Samson and the Slave Queen” (1963). He was often found milling about in crowd scenes or as most of his 22 Euro-westerns playing gamblers, townsmen and bartenders. I don’t have one credit where he’s actually called by name yet he shows up for over a decade in many of the Euro-westerns filmed in Italy.

Franz also appeared in a number of Fotoromanzi magazines from the mid-1960s to the mid-1970s. Once again he was not a leading actor, especially at his age but was seen in crowd and party scenes or as a local citizen supporting the main players.

He suddenly disappears from the scene in 1978 after appearing in two films and an appearance on the TV series ‘Madame Bovary’. Whether he retired or became ill and passed away is unknown. Sad that another often scene actor of the genre has been forgotten to history by film historians.