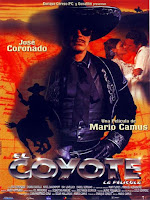 Old El Coyote will ride again. Three years of uncertainties are left behind. Mario Camus begins in September the filming of a two-part feature film for cinemas and a two-part television series about the great Californian hero of the late last century. Actor José Coronado will be the new El Coyote, in a project that will feature the presence of great international figures, such as Vittorio Gassman and Terence Stamp. (Eventually Nigel Davenport ('Charlie-One-Eye" & Ray Lovelock ("Django Kill", both Spaghetti veterans, appeared instead. Interesting the original choices Gassman and Stamp also had a history with the genre. Gassman had done three ("Dream of Zorro", "What Am I Doing in the Middle of a Revolution?", and to a lesser extent, 'Catch as Catch Can", where he played an actor appearing in a western TV commercial), while Stamp was in Fellini's "Toby Dammit", which was about an actor hired to star in the first-Catholic western. These scenes were shot and rejected by Fellini). Actresses Ana Duato, Ana Alvarez and Mar Flores will round out cast of the new adventures of the mask and Charro hat, created in the forties by José Mallorquí.

It is the California of the late nineteenth century already held by the Americans. There are old Spanish hidalgos, with Mexican former owners of the territory and Americanos, as well as great emigration. It is in this context that the righteous figure of El Coyote, son of a wealthy farmer, educated in Havana, Cuba and a little foppish, who decides to defend the interests of Californians in a very individual way arises. This Peacock wearing the mask and Charro hat, El Coyote becomes a champion of a humble people against Americans. The stories of El Coyote were written by Spanish born José Mallorquí, one of many authors of the forties dedicated to narrating novels of popular evasion and who achieved enormous success. These stories, similar to the exploits of The Shadow or The Hood, achieved enormous success and delighted many a reader. One of them, Mario Camus, had read and remembered them as an important part of the popular and naive literature of the time. They were westerns with Californian connotations, full of lots of action, big rides, stagecoaches and battles. Set in the outdoors." Camus savors the words. Complex stories and great approaches to getting into the adventures are behind us at the moment. He has the strength and eagerness to succeed. "I know it's going to be a beating and it's going to be a major physical job on me, but it has a very attractive appeal"," says Camus, 62 (in 1997. Camus had previously made "The Anger of the Wind", starring Terence Hill, and released in English as "The Revenge of Trinity")
The project of "El Coyote" began three years ago by producer Enrique Cerezo (who went on to make "Outlaw Justice" and "Dead for a Dollar" the following year). Initially announced as a 11 television episode script based on the adventure novels of The Coyote. The scripts were supervised by the son of Mallorquí. Throughout this process there were many leaps and changes. Finally, for budgetary reasons, a sharp reduction in the magnitude was required. While waiting for a start date Camus directed "Adosados" and "El color de los nubes", and was preparing "The City of Wonders", from the works of Eduardo Mendoza. Camus put this last project on hold in January when "like an arrow", El Coyote came soaring into motion.

On September 1, Mario Camus will begin filming three films - a feature film for cinemas and two hour-and-a-half episodes for television (Antena 3). The titles of the three will be "La vuelta del Coyote" (The Return of the Coyote), "Don César de Echagüe" (Mr. César de Echagüe) and "El tribunal del Coyote" (The Trial of the Coyote). They will be filmed together and the first part will play off in cinemas, with the later pair on television projected over a four month period. The project is being produced in collaboration with Juan Gona, and has a budget of about 700 million pesetas. Mario Cámus has the invaluable collaboration of art decorator Gil Parrondo, who has a lot of the familiarity with the Spanish country geography. He has scouted for natural spaces and California style haciendas to added to the effect. Parrando and his assistant Javier Artiñano, will come up with the look of this very special time. 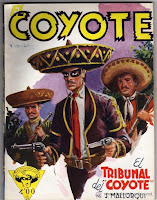 The shooting will take place in four different sites. The first, located in the north of the province of Burgos, bordering Cantabria, for the great horseback riding and the action sequences. These scenes will be filmed throughout the month of September, and then the unit will move to the east to Extremadura, near Portugal, for it's natural cortijos of the seventeenth and eighteenth centuries, that Gil Parrondo will turn into California estates. Almeria will be the third stage where the more western scenes will be shot among the glorious sites which have a cinematic past. By the end of November, the team will move to Madrid to do the interior shots in a studio.