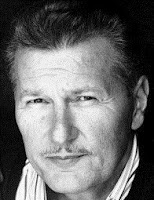 Il Mondo dei Doppiatori, the Italian Voice Actor Database, posted that theater, film, TV and voice actor Carlo Sabatini passed away on April 10, 2020 in Rome, Italy. He turned 88 three days before on April 7. Born in Rome in 1932 Sabatini appeared and was heard in all facets of the entertainment industry. He was known primarily as one of the premier voice dubbers in Italy. He was the voice of Clint Eastwood, Donald Sutherland, Kris Kristofferson, Alain Delon, Paul Newman, Robert Duvall and Marlon Brando. He was heard as the Italian voice of Harvey Keitel in “From Dusk Till Dawn”, Morgan Freeman in ‘The Wings of Freedon” and Bruce Lee in “Three of Operation Dragon”. He is the father of actor Gabriele Sabatini. His voice was heard in the Euro-westerns: “Massacre at Fort Holman” (1972) [Italian voice of Aldolfo Lastretti]; Another Man, Another Chance (1977) [Italian voice of James Caan] and “Jonathan of the Bears” (1994) [Italian voice of John Saxon].
Posted by Tom B. at 9:54 AM