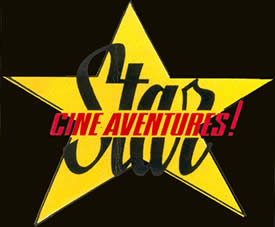 Star cine aventures was a fotomagzine devoted to American and Spaghetti westerns authored and published by Fraco Bozzesi in Rome, Italy from 1957-1974. It was released in Italy in Italian and France in French. It was a bi-monthly periodical where each issue told showed a film in a photo novel form. Each issue contained approximately 50 pages (some bonus issues contained 100 pages) and was 19x26cm in size with black and white photo pages and color covers. 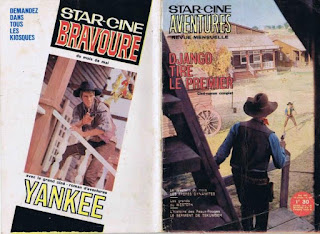 In 1961 the Star cine aventures collection was broadened with two sister publications Star cine bravura and Star cine vaillance. Both were devoted to both war and adventure films such as sword and sandal, caped warriors, pirates and chivalrous heroes. They were published twice a month until 1966 then became a monthly production. In 1968 the company was passed on to Edistar directed by EM Cavaglia and distributed in France by Cine-Periodigues. The stories then became almost exclusively devoted to Spaghetti Westerns. In 1968 two new magazines were added Star Cine Colt and Star Cine Winchester. Of the three periodicals this was the first to end while the other two concentrated on Spaghetti westerns. The back covers usually showed a cinema starlet in a bathing suit or other provocative pose.

In 1972, Cine Periodigues became independent from the Italian publisher and became exclusively French directed by Louis Duchesne, and continued to publish Spaghetti westerns. The magazine folded in 1973 but left an indelible mark.

Star cine vaillance appeared every other Saturday and presented mainly westerns, costume and war films including three Robin Hood adventures. Of the three periodicals this was the first to end while the other two concentrated on Spaghetti westerns. 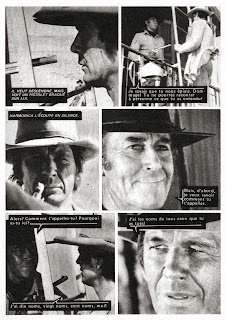