Who Are Those Composers? ~ Carlo Pes 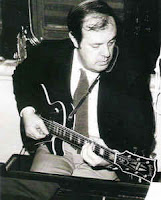 Carlo Pes was born in Cagliari, Sardinia, Italy on March 3, 1927. He moved with his family to Rome where he became passionate about jazz and made his debut in 1945 as a guitarist in a complex together with Enrico Simonetti and Bruno Martino. He then played throughout the following decade with some great names such as Lionel Hampton, Stan Getz, Django Reinhardt and Toots Thielmans, while continuing to train with Bruno Martino.

At the end of the 1950s he joined the Rai Orchestra then subsequently with Maurizio Majorana on bass, Antonello Vannucchi on keyboards and Roberto Podio on drums and percussion. He then formed the Marc 4 complex which recorded many soundtracks of Italian films of the 1960s and 1970s.

Pes spent a few years in Brazil with his brother Paolo a double bass player, where he had the opportunity to study musical folklore.

In 1963 he recorded the song Quisasevà, composed by Armando Trovajoli, which was chosen as the theme song for the television program Il Giornalaccio. In the mid-70s he spent a long period in the U.S.A., where he played alongside musicians of the caliber of Toots Thielmans, Stephane Grappelli, Chet Baker and Joe Pass. During this time he also worked as an arranger for RCA Italy. He settled permanently in Rome carrying on his activity between festivals, night clubs, studio recordings and television broadcasts as a conductor. At the same time he also began a career as a composer, writing songs for Mina, Carmen Villani, Paul Anka, Jose Feliciano, I Ricchi e Poveri and Franco Califano; surely his most famous music is that written for Il mondo , an international success by Jimmy Fontana, and What will it be. In 1971 he participated in the Sanremo Music Festival and became aevergreen of Italian music.

In the 1980s he formed a swing sextet, the Swing Sextet of Rome, with Franco Chiari on vibraphone, Baldo Maestri on clarinet, Maestro Roberto Pregadio on piano, Alessio Urso  on double bass and Roberto Zappulla on drums; the group recorded the album Five Continents for Fonit Cetra.