We continue our search for film locations for “Bullets Don’t Argue”. Pat and three deputized men ride after George and Billy Clanton until they get to the Rio Grande River separating the United States and Mexico. The three deputies refuse to cross saying they’ve already ridden twenty miles beyond their jurisdiction and they won’t cross into Mexico for $20.00 a month. Pat tells the men he can’t force them but for his $30.00 a month he must pursue them to stop them from raiding other towns along the U.S. border. He crosses the Rio Grande and enters Mexico.

The river used as the Rio Grande is called Rio Alberche and is located outside the town of Aldea de Fresno, Spain . This location has been used in several Euro-westerns including, “A Fistful of Dollars”, “Minnesota Clay”, “Up the MacGregors”, “The Hellbenders” and “The Avenger”. 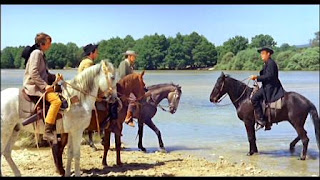