After creating a long succession of lone heroes, for his new compnay G. L. Bonelli chose as  protagonists a riotous trio of brothers, who were given the faces of the American actors John Carradine, Victor McLaglen and Montgomery Cliff. The Bills (this was their surname, not a first name) were a terrible trio of avengers, who, in deference to an oath sworn to their father upon his deathbed, only resorted to weapons in absolutely desperate circumstances and always tried to avoid killing. But on the other hand, they would smash the hand of anyone who dared take a shot at them, so that whoever it is never had a chance to do the same again! Always ready to get involved in fisticuffs, the trio (Black, an uncommunicative sort of guy with a strange costume that gives him a rather somber air; Sam, an easy-going giant who is just as happy taking part in a lively round of drinks as in a Homeric mêlée, and finally Kid, the "little one" of the family, a puppy already equipped with a good set of teeth) are absolutely unstoppable. Their adventures come thick and fast like an avalanche and they experience all sorts of excitement, narrated with the customary panache by G. L. Bonelli, whose scripts have lost none of their freshness and still make excellent reading today. Kid, Black and Sam Bill were at first depicted graphically by Giovanni Benvenuti, who began by composing the drawings for comic strips and later became a consummate and renowned illustrator. His drawings, which were highly realistic, accentuated the already pronounced characterization of the protagonists. He worked in collaboration with Roy d'Amy, who later, in 1955 (when the series was resumed by virtue of the enormous popularity of the characters) took over the entire task of producing the drawings, with the aid of a few co-workers. "Il ritorno dei tre Bill" ('The Return of the Three Bills', as the second series was called) also achieved considerable success, thereby demonstrating the evocative power of these characters. There followed several reprints, and the characters made their last appearance in Italy in a few albums of the famous Collana Rodeo.

After creating a long series of solitary heroes, G. L. Bonelli chooses, as protagonists of a new book, a wild trio of brothers who came equipped with the faces of the actors John Carradine, Victor MacLaglen and Montgomery Cliff. The Bill (is the last name, not a name) are a formidable trio of bogeyman that to maintain an oath made to his father on his deathbed, they resort to arms only in desperate cases and always try not to kill. Vennero originally designed by John Welcome, first cartoonist, then skilled and known illustrator. They made their last appearance in Italy in some registers of the famous necklace Rodeo.

Giovanni Benvenuti was born on June 20, 1926 and made his debut at the publishing house Mondadori, illustrating the comics adaptation of 'L'Ultimo dei Mohicani' in Topolino. Also for Mondadori, he illustrated several short stories for Gli Albi d'Oro. From 1950, he drew 'Buffaletto Bill' for Editrice Nika, and from 1955, he took on episodes of 'I Tre Bill' with scripts by Gianluigi Bonelli over at Audace. He was also active as a cover illustrator and painter. Initially influenced by Walter Molino, later by Americans like Eisner and Caniff, Benvenutti eventually developed his own personal style. 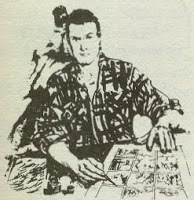 Rinaldo ‘Roy’ Dami was born on September 29, 1923 in Crimson del Grappa, Italy . Dami, who was also known under the anglicized version of his name, Roy d'Ami, was a versatile creator of comics and the head of one of Italy's most prestigious art agencies of the 1950s and 1960s. Dami was taken prisoner by the British in North Africa in March 1943. He was sent to a camp in Algeria, and then to the island of Malta. Upon his return in Milan in 1947, Dami started working in the advertising and animation field.

He drew his first comics in 1948, when he found work at the publishing company Cremona Nuova. There, he illustrated series like 'Blek e Gionni', 'Dixy Scott' and 'Il Piccolo Sergente', in a style influenced by Milton Caniff. During the early 1950s, he drew a great many western comics for Audace, including 'Mani in Alto', 'Gordon Jim', 'Il Sergente York', 'Cherry Brandy', 'La Pattuglia dei Bufalli', 'Il Ritorno dei Tre Bill', the Bonelli scripted 'Rio Kid' and 'Pecos Bill', scripted by Guido Martina. Later on, he created several strips for Corriere dei Piccoli, such as the humorous 'Scuterino' and 'Indianetto', as well as several scenarios for other artists, such as Carlo Porciani ('Davy Crockett', 'Haywatha'), Leone Cimpellin ('Nerofumo'), Paolo Piffarerio ('Apollo il Pollo') and Ferdinando Tacconi ('Moby Dick'). Also, he created 'Piccolo Bisonte' in Corrierino.

In cooperation with his brother Pietro, he founded his own art agency in 1954. The Studio Creazioni d'Ami with its many artists provided artwork for national publications, as well as foreign publishers and agencies, such as the Fleetway (UK) and Lug (France). Although he was the head of a very productive art agency, d'Ami continued to produce comics himself. He worked for Fleetway's Jack and Jill Annual 1958, and scripted 'Little Scooty' (art by Lupatelli). He also drew for War Picture Library and Battle Picture Library.

In 1960 a rift appeared between the brothers Dami, and the amount of English assignments decreased, forcing some of the artists employed to seek work elsewhere. By the mid-1960s, d'Ami's interests turned from the military to natural history. In the late 60s, Carlo Porciani joined with Roy D'Ami in the production of more natural history books, while his brother Piero set up his own publishing company.