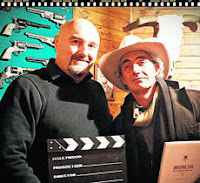 The filming of “Arizona 1878” with actor Micky Molina in Tabernas has started.

The new western film wa recorded during the weekend of March 12/13 in the Town Oasys Mini Hollywood. Actor Micky Molina agreed to participate in the short because of his friendship with director Manuel Olaya and because it is a good script.

The filmmaker Manuel Olaya Almanseñas shot the short film “Arizona 1878” in the village of Tabernas MiniHollywood Oasys. It was recorded over the weekend, although there is a sequence to be shot in the province of Teruel.

Olaya explained yesterday that Arizona 1878, "Is a typical western featuring the story of two prisoners who by chance find their freedom and on their journey of both, separately learn to survive in the inhospitable and dangerous way back home, and with surprises that change their lives, for better and for worse".

Olaya said he was very happy to shoot in Tabernas. "I am a lover of westerns and for me it is a dream to shoot in places where Sergio Leone and Clint Eastwood filmed." Meanwhile, Micky Molina agreed to work in this short because of his friendship with Manuel Olaya and because he really liked the script. "It's a good short, a good script, so I did not hesitate for a moment to agree to the project.

Several sequences with Bruno Jimenez and Micky Molina were filmed over the past weekend. The makeup and prop master was Rosario Alarcon, newly arrived from France with more than 30 years working in the best theaters in France. The whole crew was very excited with this short, and they hope that the final product comes out as expected.