Who Are Those Guys? - Mircea Breazu 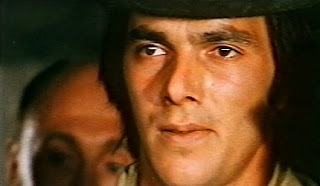 Mircea Breazu was born in Sebes, Transylvania, Romania on January 22, 1946. A former ILSA swimmer Mircea Breazu is one of the most beloved and successful actors in Germany.  Born in in the Transylvanian city of Sebes, Mircea Breazu moved to Timisoara, where he attended high school at "Nikolaus Lenau".  After high school in 1963 he enrolled at the Faculty of Civil Engineering, but abandoned it for his passion for the theater.  After five years of study at the Faculty of Theatre and Film (German section of Romania) Mircea Breazu finished seventh in the 1,200 graduates, receiving the title of "Doctor of Art".  "Love for the theater in my blood," he says, because his mother was also an actress.

In childhood, Mircea's favorite readings were the novels of Karl May. Together with his friends he made ​​sketches from books about the Wild West of May without knowing that later he would embody Winnetou, chief of the Apaches, over 1,000 times.  He remembers that in his childhood, when he was brought to see Winnetou at the movie theater in Romania, he watched it 15 times!  A fine athlete, Mircea Breazu practiced swimming (at ILSA Timisoara), cycling (participated in the National Championship Cycling Junior), horse riding (club sporting military "Red Star" Bucharest) and automotive (enrolling in various car rallies) all using them later in his artistic career.

Abandoning a career in sports, the future "Winnetou" debuted on stage in 1968 at the "Theater" Nottara " in Bucharest, in the musical “Miracle”. By 1978, Mircea Breazu had appeared in German and Romanian plays in dozens of theaters in Bucharest, Brasov and Sibiu. Hi film career began in Romania. Three films established him in the consciousness of moviegoers: "Tinereţe fără bătrâneţe" (1968), "Mihai Viteazul" (1970), directed by Sergiu Nicolaescu and "Profetul şi ardelenii", in 1977. He starred in co-productions Romanian - German and Romanian - Italian: "Bătălia pentru Roma", "Străinul", "Geniul", "Căminul drag".

In 1979, Mircea Breazu immigrated to Germany with his mother, his wife and son, settling in the city of Bielefeld.  "Here I found not only a new home but a new artistic life at the State Theater of Bielefeld," says the actor.  Only a year after his arrival in Germany, he changed his stage name to Benjamin Armbruster.  This was noted not only for the actors but for choreography.  In addition, "Benny" helped his younger fellow actors coordinate fight scenes, especially fencing.  Benjamin Armbruster appeared in plays with his mother, who says is from whom he developed his acting skills.

In 1988, Benjamin Armbruster appeaered as Winnetou at the German Karl May Festival. He appeared for so many years in the role the Germans do not even talk about him as "actor who plays Winnetou", just calling him naturally, "Winnetou". MIrcea admits that the role of the Chief of the Apaches was weighed heavily on his physique, his sporting abilities and that he knew how to ride and fight. He never tired of the role because, he says, "I love the people I work with, I love horses and the idea of playing in nature, and the live-effect".

Beyond acting, stunts and choreography, Benjamin Armbruster’s hobbies are horse riding, cycling, motoring, music (he already has two CDs on the market) and movies where the protagonist is Richard Dean Anderson, Stargate actor and McGyver.  Dealing with staff and horses at the Winnetou play, where he cares for them and trains them personally.