The Revenant, Man in the Wilderness, and the Intersection of History, Legend, and Art 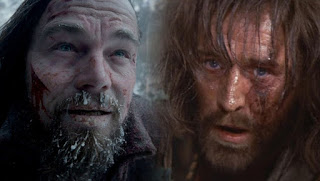 Warning: Spoilers for both The Revenant and Man in the Wilderness are present

Watching and comparing movies like The Revenant and the 1971 film Man in the Wilderness means to consider not only the way the filmmakers tell the story, but the nature of the story itself. The tale of Hugh Glass and his miraculous recovery from a bear mauling has been told for nearly two centuries in myth and for decades in various forms of literature, but what does it really mean? What lessons can we take from Hugh Glass’s survival and response for being left for dead by his party? Those are the questions that the film versions are meant to explore.

I find these sorts of comparisons fascinating because it hearkens back to a form of history and record-keeping we don’t much rely on anymore. The idea of history as an objective record of what actually happened is a fairly recent innovation. For the longest time, historians were not so much interested in what happened as to what the events meant. Ancient Greeks and Romans filtered their era’s tumultuous politics as a reflections of quarrels between their equally ill-tempered gods. The writers of the Gospels conflated the early years of Jesus with elements of the lives of biblical icons such as King David and Moses not necessarily because they actually happened, but because they helped inform a narrative of Jesus as the one true Messiah. Looking at The Revenant and Man in the Wilderness through that lens and divorcing ourselves from the need to bind them to historical accuracy, we see two widely different, yet still similar stories of survival and the nature of revenge.

Man in the Wilderness was directed by Richard C. Sarafian (best known for directing the groundbreaking action movie Vanishing Point, which was released the very same year as Man in the Wilderness) and stars Richard Harris as “Zachary Bass”, who is helping guide a party of trappers lead by Captain Henry (John Huston) through the wilderness when he is attacked by a bear. The story hits many of the same beats as The Revenant… we have the two party members who stay behind before running off in fear of the local Native American tribe, Glass/Bass crawling across the landscape in search of shelter, eating the corpse of an animal that had been killed by wolves, etc. As Glass/Bass struggle to recover, we are shown scenes of Captain Henry’s party making their way across the wilderness as well as the Native tribes seeking out the party, and both movies build up to a climactic confrontation where all three of these threads intersect.

What is particularly interesting is that while both stories are fictionalized in similar ways, the feel is entirely different. Both movies give their protagonist a deceased wife as well as a son (the real Hugh Glass, so far as we know, didn’t have any children) who serves as primary motivation for survival, but in entirely different ways. Zachary Bass hardly knows his son, having been away from home during his birth and even missing the death of his wife due to his work as a seaman and wilderness scout. We see Bass’s own lonely childhood in flashbacks, and it becomes clear he has become determined that his own son not go through the same torment. In The Revenant, Hugh Glass’s son Hawk is murdered by Tom Hardy’s villainous John Fitzgerald when he interrupts him in the act of trying to finish off Glass. Hawk was Glass’s only remaining connection to his deceased Pawnee wife (Hugh Glass did, in fact, marry a Pawnee woman, though the record isn’t clear if she suffered the same fate as is portrayed in this movie), and as a result his quest for survival is driven largely by his desire for revenge.

That revenge over being left for dead is essentially a secondary goal for Bass says as much about the goal of the movie as is does about the character himself. Man in the Wilderness wears its spirituality on its sleeve, from the flashbacks illustrating Bass’s difficult relationship with religion to Richard Harris’s Jesus-esque hair and beard, we’re clearly looking at a redemption story more than a revenge tale. The Revenant, by contrast, is all about revenge and survival. Glass seeks vengeance on Fitzgerald for murdering his son, and the local Arikara Indian tribe want revenge on trappers for decimating their land and kidnapping one of their women (one thing among several that The Revenant does better than Man in the Wilderness is in its portrayal of Native Americans. Man in the Wilderness makes them more sympathetic than many Westerns, but doesn’t give them much in terms of character or personality. The Revenant makes it clear who they are, what they want, and what their attitudes are towards settlers).

The long, difficult struggle faced by both Bass and Glass prior to their confrontation with those who abandoned them offers them plenty of time to consider the ramifications of their actions, and what ends up happening between them offers the most compelling contrast between the two movies. The final sequences and indeed, the final shots of both movies tell completely different stories. Zach Bass stands in front of Captain Henry, asks him to give his rifle back, and then simply continues walking, intent being reunited with his son (keeping in line with the movie’s religious theme, when Glass walks away he is followed by several members of Henry’s party). It’s a low-key, but powerful ending.

The Revenant, by contrast, ends with a brutally violent battle between Glass and Fitzgerald, but when Glass has Fitzgerald at his mercy, he remembers the words of the Native explorer who helped him, saying revenge is in the hands of God, and decides that rather than finish Fitzgerald off, he leaves him at the mercy of the Arikara tribesmen who arrived just as the battle was ending. We end with Glass making his way back through the wilderness, seeing a vision of his dead wife, and then staring into the camera with a haunting and ambiguous expression. Is he considering what to do next? Does he feel responsible for what the Arikara did to Fitzgerald? It’s deliberately unclear and nicely subversive, undoing some of the catharsis you’d expect to come with Glass’s triumph over Fitzgerald.

The other dramatic way the movies differ is in how they portray the wilderness itself. Man in the Wilderness certainly doesn’t skimp on the scenery… it was shot on-location in the south of Spain and contains some striking imagery, including a positively Herzogian opening shot of the cross-like bow of Captain Henry’s ship raised above the tree line as it is carried over land by the trapping party. It doesn’t, however, portray the environment as a character and threat nearly as much as The Revenant. Alejandro G. Inarritu and Emmanuel Lubezki create a stark, unforgiving wilderness that dwarfs all men who imagine they can conquer it. Survival in this landscape is a day-to-day struggle for all people, let alone someone as hideously wounded as Glass, which makes his journey all the more remarkable.

Both movies have some pacing issues (when a good chunk of your story involves your protagonist crawling across the ground and grunting, how can there not be?) but successfully overcome them largely due to the strength of their performances. Both Harris and DiCaprio carry the stories with little dialogue and a lot of physicality. Not for a moment are they unbelievable as mountain men struggling through the wilderness. John Huston cuts an intimidating figure as Captain Henry, whose amoral attitude and relentless driving of his party is countered by his guilt. Indeed, even when everyone else is convinced that Bass is dead, Huston remains terrified that he will return from the grave. Tom Hardy’s Fitzgerald is a classically-styled villain… a despicable piece of work so beaten down by life that he seems completely incapable of feeling happiness or pleasure.

Overall, I’d easily call The Revenant a more accomplished feat of filmmaking and would probably put Leonardo DiCaprio’s performance above that of Richard Harris. I do have to say, however, that I prefer the quiet conclusion of Man in the Wilderness to the bloody and violent finale presented in The Revenant… forgiveness is something I find more fulfilling than revenge. But both endings fit perfectly with the movies that preceded them, and they both stand equal as portrayals of the legend of Hugh Glass.

Ÿ1 Hugh Glass’s story has also been portrayed on television, in an episode of the Western anthology series Death Valley Days entitled “Hugh Glass Meets the Bear”. In that episode, Glass was portrayed by John Alderson, a British actor whose most noteworthy credit was playing Wyatt Earp in a 3rd season episode of Doctor Who where William Hartnell’s Doctor finds himself trapped in Tombstone during the events leading up to the gunfight at the O.K. Corral.

Ÿ2 I’ve got to wonder if changing the protagonist’s name in Man in the Wilderness was meant to be as much a pragmatic choice as an artistic one, as Richard Harris makes no attempt to hide his natural Irish accent. In fact, the entire Henry party is a mishmash of different nationalities; considering how being a cowboy or mountain man was often seen as an immigrant profession, this was probably more historically accurate than many people realize.