We continue our search for film locations for “Bullets Don’t Argue”. The scene shifts from the Mexican posada to the town of River Town where the wedding of Pat Garrett and Martha Coogan is being held in the local church. As the banker and his cashier begin to close up the bank in order to pay their respects to the new bride and groom they are interrupted when Billy and George Clanton ride up and demand the money from the bank’s safe. When the money bag is filled and they are about to leave Billy’s mask slips off and he is recognized. George tells Billy to get rid of them but to use his knife as any gunshots would alert the townspeople. Billy hesitates and tells George he can’t do it. George shoots both men and the Clantons mount their horses and ride for the border.

When Pat Garrett and several of the townsmen arrive, the banker tells Pat it was the Clantons did it before he dies. Pat and a posse mount up, he tells his new bride if the Clantons cross the border he will pursue them to put a stop to future raids in the territory. 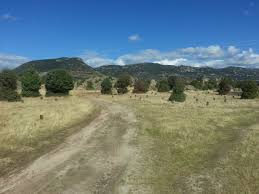 The set used for River Town is Hoyo de Manzanares nicknamed Golden City. This is the same set used for Sergio Leone’s “Fistful of Dollars”. Nothing remains of the town accept a dirt road where the main street was and a watering trough for range cattle.